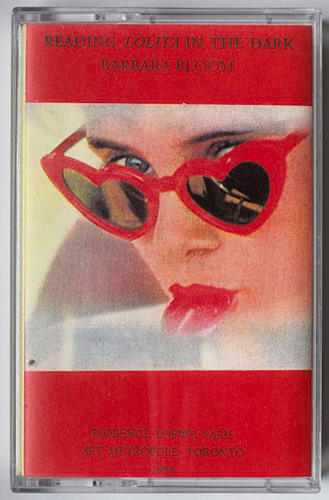 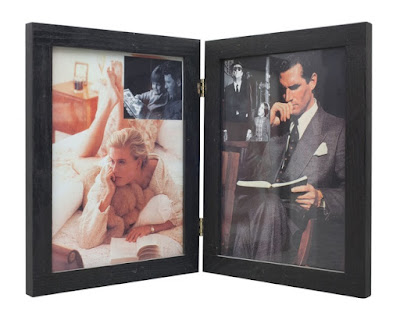 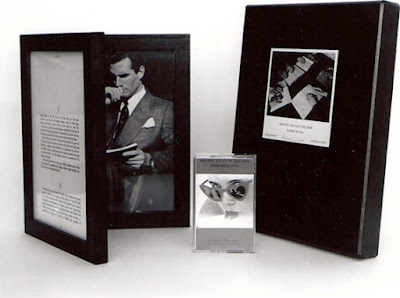 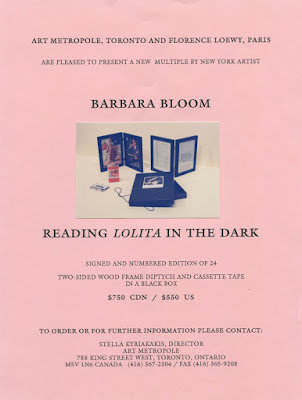 A black box containing a double-hinged frame and an audio cassette  (of David Case reading the beginning and end of the novel ).

"Vladimir Nabokov (1899–1977), the author of Lolita, is one of Barbara Bloom’s (1951– ) favourite writers. Bloom’s work is contained in a black box with a Braille title, and consists of a diptych that juxtaposes montages of appropriated photographs on one side, with copies of the first and last pages of Lolita on the other. An audiotape accompanies the piece, thereby engaging our sense of sound as well as touch and sight. The incongruity of the images, which have been assembled from various identified sources, provokes discomfort and suspicion in the viewer. Bloom uses the structure of Nabokov’s novel, described as a game of intricate enchantment and nightmarish deception, as a metaphor for this uncanny installation. Lolita is written in the first person, in the voice of a European professor, who in his diary records his lust for a young girl. There are many gaps in the narrative; after all, these are the musings of a madman. Bloom reflects the content and style of the story by grouping disparate and disturbing props; we attempt to understand the events in the novel by making connections between the objects and the text."