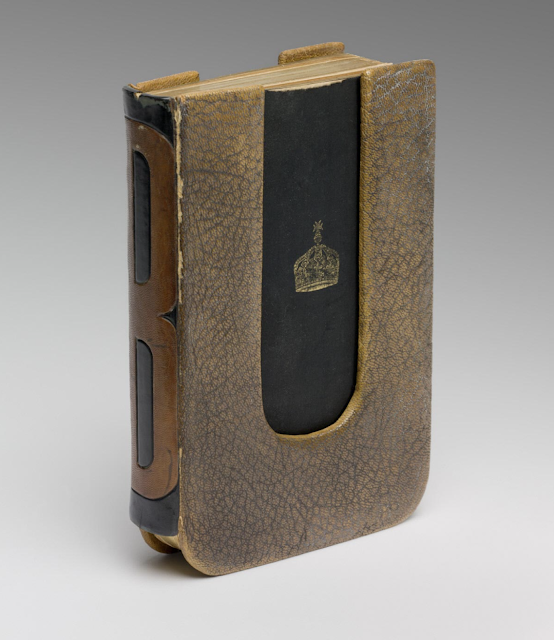 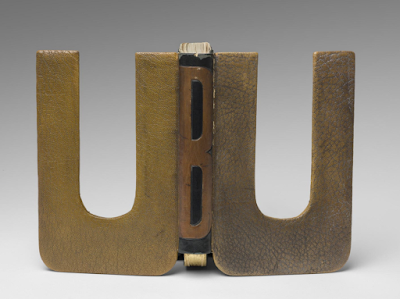 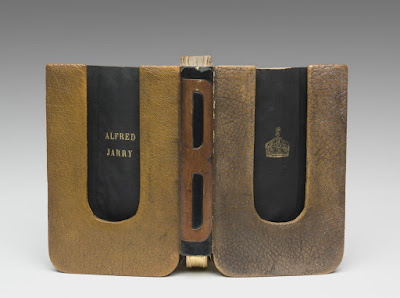 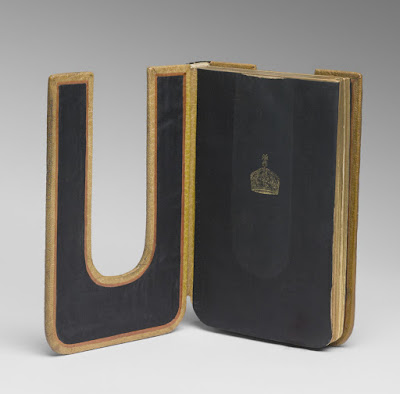 "This binding is perhaps the best known and most successful of the collaborations between Reynolds and Duchamp. On November 26, 1934, Duchamp visited his close friend Henri-Pierre Roché in Arago and excitedly reported on a binding that he had just designed for Alfred Jarry’s Ubu Roi that Mary Reynolds was going to execute. Reynolds and Duchamp created out of the binding itself an extraordinarily clever pun. Both the front and back covers are cut-out “U’s” covered in rich earth tones; the spine is a soft caramel B. The endpapers are made of black moiré silk. A gold crown, signifying the puppet king, is imprinted on the front flyleaf and visible through the front cut-out “U”. The author’s name is imprinted in gold on the back flyleaf and is similarly visible through the back U. The binding spread open spells “UBU.” Reynolds must have spent considerable time executing this binding. We know from a letter from Duchamp, responding to a question from Katharine Kuh, that the binding was not completed until 1935. It is expertly and lovingly crafted. Both Duchamp and Reynolds were so pleased with the final work, that another copy was bound identically for the American collectors Walter and Louise Arensberg (Philadelphia Museum of Art)."


Yesterday it was announced that the Morgan Library & Museum in NYC has acquired one of the most important private collections of material related to the life and work of Alfred Jarry (1873-1907). The Robert J. and Linda Klieger Stillman Pataphysics Collection includes three hundred items, including books, periodicals, correspondence, musical scores, and ephemera.

“The Morgan Library & Museum is honoured that Robert and Linda Stillman have chosen to donate this extraordinary collection to us,” said Colin B. Bailey, director of the museum. “Alfred Jarry’s short life had enormous consequences for art of the twentieth century and, indeed, up to the present day. We look forward to organizing an exhibition of these exceptional pieces and to producing a catalog to help foster ongoing scholarship of the artist’s work.”

The Stillmans, doctors and collectors, wrote that their “primary objective in assembling this unique material was to make it available to researchers and to the public, which aligns with the mission of the museum."

Included in the collection are first editions of Jarry’s rare books, several of which are inscribed to his contemporaries, such as Minutes de sable mémorial (1894) and César Antechrist (1895); the first publication of Ubu Roi as it appeared in the avant-garde magazine Livre d’Art; the author’s corrected proofs for Ubu enchaîné; and the two editions of the Almanach du Père Ubu, illustrated by Pierre Bonnard. The gift also includes extremely rare copies of Jarry’s own artistic magazines L’Ymagier, and other important avant-garde magazines, such as La Revue Blanche, La Plume, Soirées de Paris, and Le festin d’Ésope, edited by Apollinaire.

The Stillmans also collected visual art contextualizing Jarry and Pataphysics. These pieces include original woodcuts, a rare photograph of Jarry in his fencing studio and works by Joan Miró, Thomas Chimes, and William Kentridge. This parallel collection will be loaned to The Morgan Library & Museum for the forthcoming exhibition.

Dr. Linda Klieger Stillman is a leading international authority on Pataphysics and a longtime member of the Collège de ‘Pataphysique. She has devoted several decades to the study of Jarry and his legacy, and is the author of a number of books and scholarly articles, including a critical biography. Her husband is a physician in the Washington, DC area, and is currently director emeritus of the Shady Grove Fertility Center.