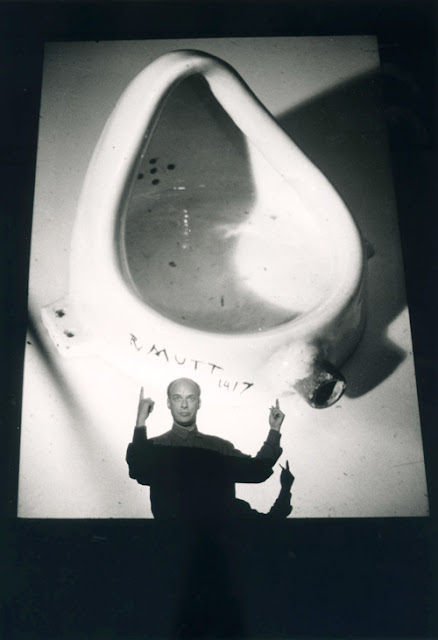 In 1990, Brian Eno gave a lecture at New York’s Museum of Modern Art which is now most notorious for something that happened offstage - a few years later he revealed that he used the opportunity to piss in Duchamp’s fountain:

I thought, how ridiculous that this particular … pisspot gets carried around the world at—it costs about thirty or forty thousand dollars to insure it every time it travels. I thought, How absolutely stupid, the whole message of this work is, “You can take any object and put it in a gallery.” It doesn’t have to be that one, that’s losing the point completely. And this seemed to me an example of the art world once again covering itself by drawing a fence around that thing, saying, “This isn’t just any ordinary piss pot, this is THE one, the special one, the one that is worth all this money.”

So I thought, somebody should piss in that thing, to sort of bring it back to where it belonged. So I decided it had to be me.

The lecture addressed similar concerns about high and low culture, and during it he mentioned a favorite piece of music from earlier that year - My Bloody Valentine’s Loveless, which he said "set a new standard for pop" . He described the single Soon as "the vaguest piece of music ever to get into the charts” and noted that if Steve Reich or Glenn Branca had been responsible for it they would have been given an award by the classical music establishment.

Almost thirty years later he and My Bloody Valentine's Kevin Shields have teamed up for a new song, the nine-minute Only Once Away My Son. Listen to it at Pitchfork, here.