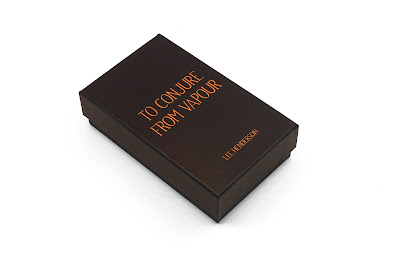 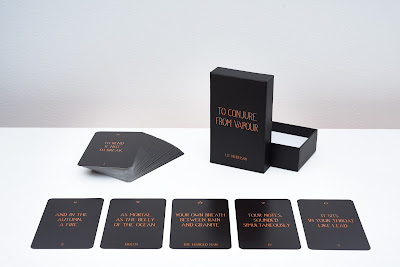 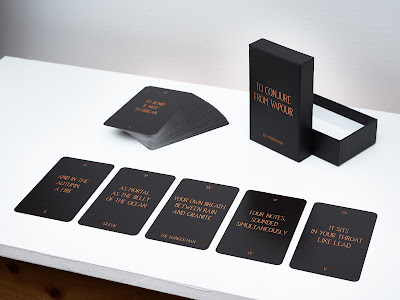 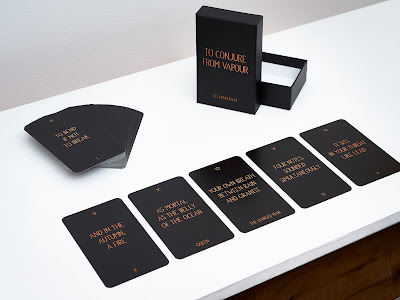 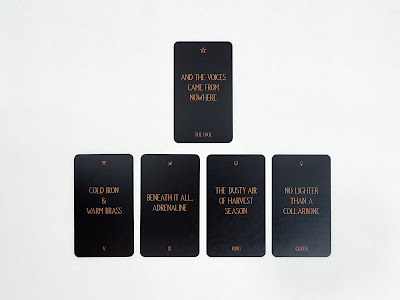 The Nothing Else Press is very pleased to announce the publication of a new work by Toronto-based artist Lee Henderson. Henderson was artist-in-residence this summer at the Glenfiddich Distillery in Dufftown, Scotland, where he produced several works which examined the notion of "spirit" ranging from supernatural apparitions, to the ideal of camaraderie, to the sort we imbibe.


To Conjure From Vapour is a tarot deck of metaphysical whisky tasting notes:

"The "tasting note" is an increasingly common technique in the promotion of scotch whisky. Most immediately, it can be described as any (expert?) account of the flavours one can expect when tasting a whisky. But at its core is a paradox, or at the very least a riddle—it's a piece of scripted text that attempts to transform a direct, subjective, evanescent experience into a shared language. This should put it firmly into the demesne of poetry.

To Conjure From Vapour therefore considers the tasting note as a communion with the spirit world (spirit as alcohol, but also as breath, or soul, or ideal). It includes a card with a custom text for each of the 22 Major Arcana and the 56 Minor Arcana, with the implements of spiritcraft replacing the traditional suits (barrel staves for wands, clocks for coins, glasses for cups, and hammers for swords). The deck facilitates the divination of one's taste before even touching the spirit; a potomancer's companion."
- Lee Henderson

Henderson's practice includes video, photography, installation, sculpture, performance, and text. His work moves in constant contemplation of death, in senses grand and minute, somewhere between the persistence of collective histories and the brevity of individual lives.