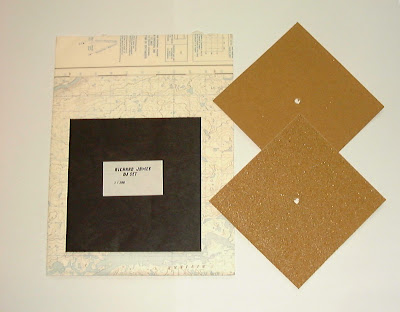 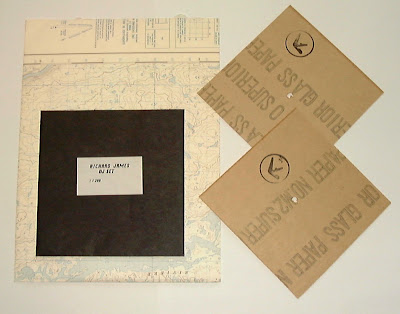 In a post about Warhol's cover for the Rolling Stones' Sticky Fingers there was a footnote that mentioned Public Image Ltd's intention to create an album cover out of sandpaper (to destroy the records beside it in your collection). That idea was scrapped and the disc eventually housed in the now infamous metal film can (the release became known as Metal Box, though it's later reissue was titled Second Edition).

The post led to a discussion with artist Mark Pawson about Aphex Twin (Richard D James) and this sandpaper record. I remember reading in early articles about James that he had subjected an audience to a set where he placed the stylus on sandpaper, but was unaware that they were ever editioned.

A few weeks later Pawson unearthed his copy and sent these images and the following information:

The sealed envelopes were handed out at the end of the night, Thursday 1 December 1994, as people were leaving the club, and also contained 3 postcards/flyers,
one for the night itself,  which has a schedule of the nights events, with Richard James' set, 9.10-9.40pm,  listed as:-   ??????? ?????
+ a card for an Iain SInclair/Brian Catling/Douglas Oliver event on 8 December
+ card advertising a Chapman Brothers 'Fuckface' t-shirt which Disobey had printed.

I subsequently found a copy that had sold on Ebay a couple of months prior, with a final bid of $240. The auction was linked to from many electronic music boards, with some seemingly knowledgeable fans calling it a hoax. I can't find it on any official listing, though 200 is a pretty small edition size and if they were given away free at a club it's possible many didn't even make it home that night.

The Ebay listing seems legit to me, from citing the band Labradford as the source, to noting an imperfection (if it's a forgery, why damage it?):

Richard James sandpaper DJ set, with small center holes.  It's a piece of sandpaper and cardboard backing, with Aphex logo stamp.  Don't know the story behind this one -- acquired from the Labradford guys.  The ultimate noise record.  Limited to 200.  Small tape rip on back -- nothing deterring.

I wonder if the skepticism has anything to do with the fact that each available copy appears to be number 1 in the edition. I'm guessing that the 1/100 indicates that it's an edition of one hundred, but they are not individually numbered.

If anyone has information about other copies, let me know. Here's the origin story:


It started off in 1994 at a club called Disobey, around the corner from where
Richard lived. He would go down there to see all the weird and wonderful acts
they had, and one time they asked him to DJ. First, he dropped a tone arm on
a sheet of sandpaper, sending an ear-shattering roar of scratchy distortion
through the shocked crowd. Next, he stuck a microphone inside a blender and
flipped the power switch.

Disobey really got into it and invited him to go to America to do it again.
It was only supposed to be a one-off, but they wanted to pay him and take his
friends, so he did it. It was Blast First Records' showcase in New York, and
there were people there who danced to it; they thought it was death metal or
something. He just mixed some sandpaper together for a bit and then played a
food mixer and threw it at someone. Oops! It hit the bloke on the head. "I
thought I would get sued for that," Richard worried, "but he wanted me to
sign it afterward. He said, 'I will keep this food mixer forever.'"