There Will Never Be Silence: Scoring John Cage’s 4’33″ 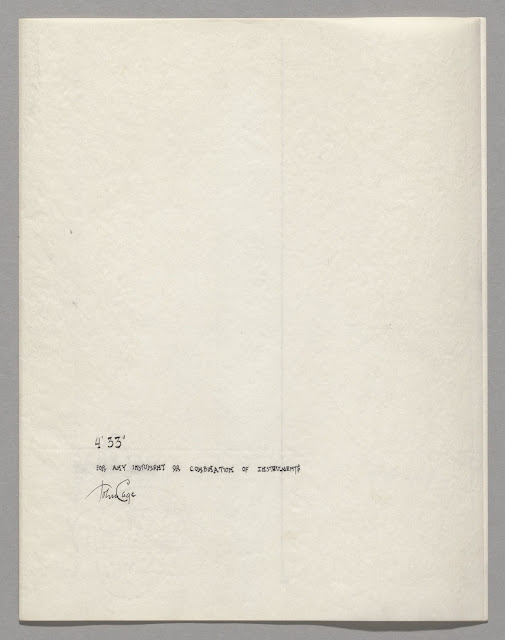 Looks like David Plaztker is already making his mark at MOMA. Platzker, who previously ran Specific Object and before that was Director of Printed Matter, has teamed up with Jon Hendricks (an authority on this type of material and the authority on Fluxus) for a show that looks at the influence of Cage's 4'33". The press release is below:

On a warm summer evening in August 1952, pianist David Tudor approached a piano on stage at the Maverick Concert Hall in Woodstock, New York. Stopwatch in hand, Tudor sat before the piano and, without striking a note, premiered John Cage’s composition 4’33”. Commonly known as Cage’s “silent” piece, 4’33” comprises three movements, during which a performer—or performers—are instructed to produce no intentional sounds for four minutes and 33 seconds. This radical gesture upended the conventional structure of music, shifting attention from the performer to the audience, and allowing for endless possibilities of ambient sounds to fill the space. Today, 4’33” is recognized as a groundbreaking work that synthesizes Cage’s interests in chance operations, experimental music, and visual arts. When discussing the work over his lifetime, Cage emphasized that, rather than intending to simply shock his audience, he hoped to attune listeners to silence as a structure within musical notation. In the visual arts, Cage’s contemporaries were similarly using chance, “negative space,” and physically dematerialized works that encourage open presentations or interpretations of scripted experiences. This exhibition introduces the Museum’s recently acquired score for 4’33″ and examines it, and Cage’s influence, as a critical pivot around which a diverse array of artists working throughout the 20th century can be united. Taking its title from a letter written by Cage in 1954, There Will Never Be Silence features prints, drawings, photographs, paintings, sculptures, and films by such artists as Marcel Duchamp, Kurt Schwitters, Robert Rauschenberg, Robert Morris, Lawrence Weiner, Yoko Ono, Andy Warhol, and other artists associated with Fluxus, Minimalism, and Conceptual art who pushed preconceived boundaries of space, time, and physicality to new ends. There Will Never Be Silence is organized by David Platzker, Curator, Department of Drawings and Prints, with Jon Hendricks, Fluxus Consulting Curator.