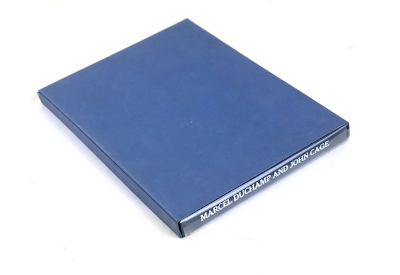 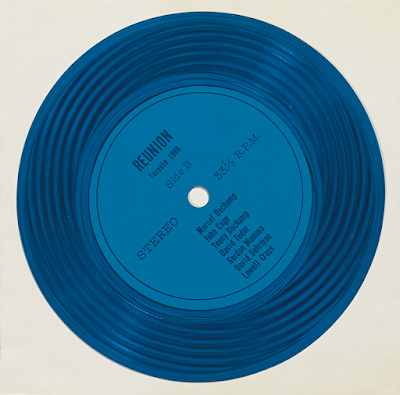 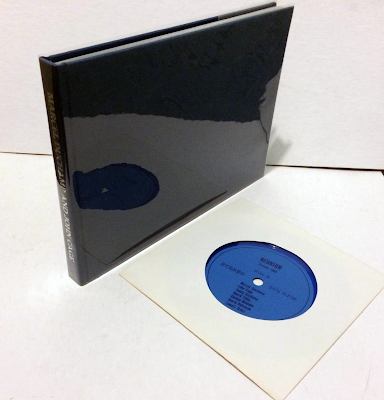 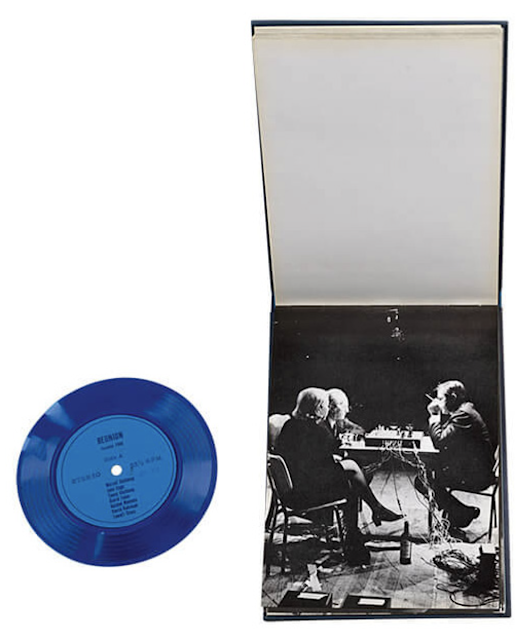 Shigeko Kubota
Marcel Duchamp and John Cage / Reunion
Japan: Takeyoshi Miyazawa, 1970
174 pp., 16.2 x 21.9 cm., hardcover in slipcase
Edition of 500 numbered copies
On March 5th, 1968, at the Ryerson theatre in Toronto, Marcel Duchamp and John Cage played chess in front of an audience. The chess board - designed by Lowell Cross (see quote below) - was wired to transmit sound and light. Other musicians involved include David Tudor, Gordon Mumma, and David Behrman.
Duchamp reportedly quickly beat Cage, and the rest of the four-and-a-half-hour event featured his wife Teeny Duchamp playing against the composer. Towards the end the performers were said to have outnumbered the remaining audience.
William Littler, music critic for the Toronto Star ,declared the event “mighty boring" and his colleague  Robert Fulford found it “infinitely boring”.  Kenneth Winters, writing for the now defunct Toronto Telegram wrote that the “fusty, dusty, illustrious visitors are just about sufficiently fossilized for reverent immurement in a university". The Globe and Mail didn't consider the evening important enough to send a reviewer.
Subsequently, Reunion has gone on to become legendary - two giants of the 20th century appearing together, one of them for the last time on stage (Duchamp died a few months later, at the age of 81). One of my favourite pieces in my collection of ephemera is the yellow ticket for this event, though I wasn't able to track it down for this post.
Artist Shigeko Kubota's video practice included many works made in tribute to Marcel Duchamp (and her husband Nam June Paik made many in tribute to John Cage). Her documentation of this event was later developed into three works - this book, a videotape and a video sculpture, ranging from 1970 to 1975.
The book features a series of photographs she took during the night, a text by Cage titled "36 Acrostics re and not re Duchamp", and a flexi-disk with two short excerpts of the performance. These represent the only publicly released recordings of Reunion.
Released in an edition of 500 copies, the book is incredibly scarce and is valued at between three and five thousand dollars.
"One cold evening in late January or early February 1968, John Cage telephoned me at the Spadina Road apartment in Toronto where my wife Nora and I lived. He had already heard the results of electronic sound-motion produced by the circuitry of my “Stirrer”. Cage asked if I would build for him an electronic chessboard that would select and spatially distribute sounds around a concert audience as a game unfolded. Because I was in the process of completing my graduate work at the University of Toronto, at first I politely refused his request. He said, “Perhaps you will change your mind if I tell you who my chess partner will be.” After I said “OK – ,” Cage said, “Marcel Duchamp.”
Cage told me that he was naming the piece Reunion because he wanted to bring together artists with whom he had been affiliated in the past in a homey but theatrical setting. He and Duchamp would play chess at center stage, and the moves of the game would result in the selection of sound sources and their spatial distribution around the audience. Duchamp would sit in a comfortable easy chair (Cage would be content with an ordinary kitchen chair); Teeny would sit close by and watch; my “oscilloscopic” TV sets, on stage, should be in operation; and the chess aficionados at center stage would drink wine and smoke – Duchamp, cigars; Teeny and Cage, cigarettes. All the while, Cage’s composer-collaborators Behrman, Mumma, Tudor, and I would provide the electronic and electroacoustical sounds of the concert experience. Clearly, Reunion was to be a public celebration of Cage’s delight in living everyday life as an art form.
[...]
Chess had been part of Duchamp’s everyday life for decades, and in the 1960s it became part of Cage’s everyday life, too. The composer had revered Duchamp since their first meeting in 1942, but kept his distance “out of admiration.” Cage eventually found enough courage to ask Duchamp for chess lessons, essentially as a way of getting to know him [9]. The setting for Reunion on the Ryerson Theatre stage – with the imposing chair for Duchamp, the cigars and cigarettes, the wine and chess – was an obvious imitation of the scene at the Duchamp’s second-floor New York townhouse."
- Lowell Cross
“I met Duchamp on an American Airline flight to Buffalo for the opening of ‘Walkaround Time’ by Merce Cunningham. It was a cold winter in 1968. The airplane couldn’t land at the airport in Buffalo because there was a blizzard from Niagara Falls. We landed at the airport in Rochester, then took a bus to Buffalo. In Toronto later in 1968, I photographed Marcel and John Cage playing chess at the ‘Reunion’ concert.”
- Shigeko Kubota
Labels: John Cage, Marcel Duchamp, Nam June Paik, Shigeko Kubota