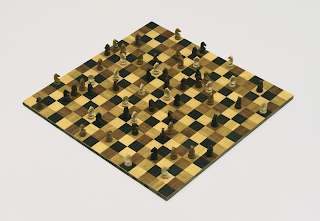 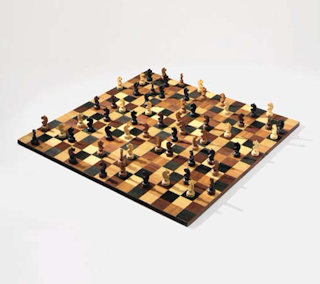 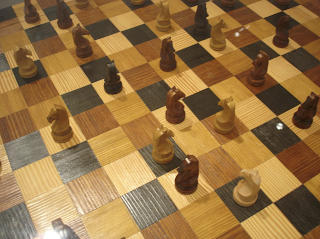 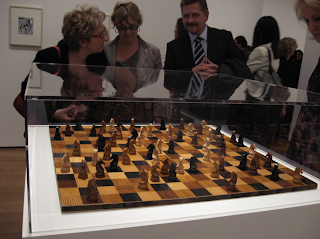 Gabriel Orozco
Horses Running Endlessly
Self-published, 1995
2 x 88 x 88 cm.
Edition of 3 [+1 AP]
"This sculpture, from a series of works by Orozco that reinterpret games, appears at first to be a chessboard—a simple, everyday, readymade object, in the tradition of Marcel Duchamp. However, closer examination reveals a logic that subverts the conventional game. Orozco's chessboard is made of four colors instead of the standard two, and the traditional eight-by-eight board has been reconfigured to be sixteen by sixteen, with 256 squares. Instead of including the usual thirty-two pieces (kings, queens, rooks, bishops, knights, and pawns), Orozco has made all the players knights. In this game knights can play on indefinitely, turning through space infinitely, unchecked by other players.
Orozco orchestrates space and movement by changing the logic of a rational, rule-bound game. With a poetic sensibility, he creates a visual paradox, an endless imaginary trajectory of space and a compelling vision of time without end. This theme of perceptual discovery recurs in Orozco's diverse oeuvre, which includes sculpture, installation, photo-graphy, painting, and drawing."
- MoMA

"Rather than reasonably conceivable variant of the traditional chess game, Gabriel Orozco’s Horses Running Endlessly, 1995, calls to mind something resembling Mondrian’s Broadway Boogie Woogie remade by a hallucinating Bobby Fischer. Crowding onto this large four-color chessboard with 256 squares—instead of the usual 64—a throng of knights (also in four colors rather than two) mobilize, the pieces distributed in an order governed only by the principle that the color of the square must correspond to the color of the knight. The configuration of the pieces is rich in potential transformations. On a conventional chessboard, the knight can successively occupy all the squares without ever passing through the same one twice. I do not know whether this possibility exists on Orozco’s oversized version, but I imagine nevertheless the simultaneous setting in motion of the pieces and the quasi-infinite potential configurations. Moreover, each viewer is free to modify the given configuration as he or she wishes (at least according to the allowable moves of the knight). Like a Calder mobile one could activate with a fingertip or merely a breath, Horses Running Endlessly is a machine to produce diversity."
- Artforum
Labels: chess, Gabriel Orozco