Andy Warhol | The Thirteen Most Wanted Men (Dossier No 2357) 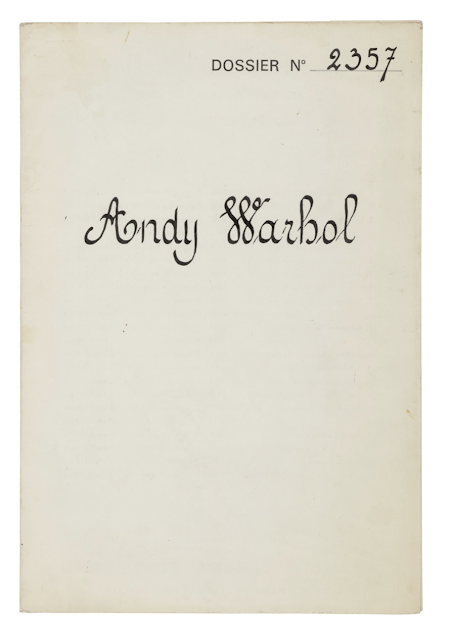 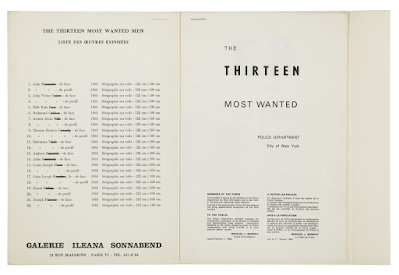 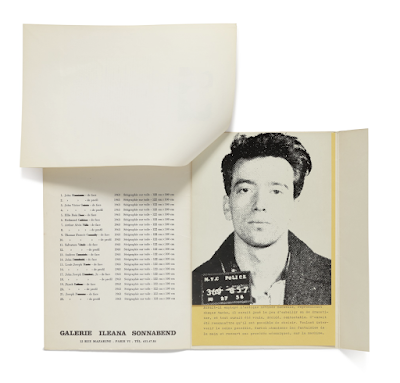 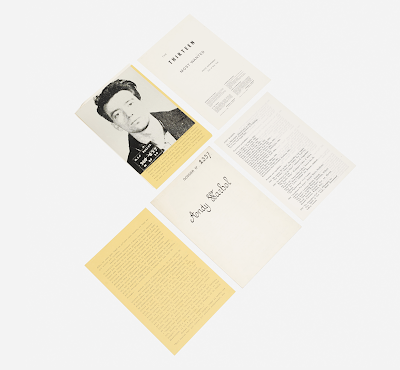 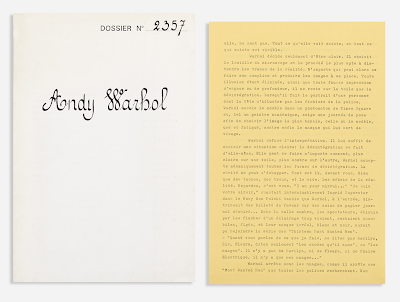 Andy Warhol
The Thirteen Most Wanted Men (Dossier No 2357)
Paris, France: Sonnabend Gallery, 1967
27 × 18 cm.
Edition size unknown
Andy Warhol reportedly only produced a single public artwork in his lifetime, and it was on display for less than forty-eight hours.
New York State Governor Nelson Rockefeller had invited architect Philip Johnson to design the New York State Pavilion for the 1964 New York World’s Fair. Johnson identified ten then-nascent artists and commissioned them to produce works to adorn the exterior of the Pavilion’s circular Theaterama: Peter Agostini, John Chamberlain, Robert Indiana, Ellsworth Kelly, Roy Lichtenstein, Alexander Lieberman, Robert Mallary, Robert Rauschenberg, James Rosenquist and Warhol.
Lichtenstein contributed a laughing comic-strip woman leaning out a window, Rauschenberg created a collage of 1960's American history featuring President Kennedy called Skyway,  Kelly paired large curved monochromatic forms, and Indiana contributed a blinking sign that read “EAT.”
Warhol proposed something a little more controversial.
John Giorno attributes the idea to painter Wynn Chamberlain, who was dating an NYPD officer at the time. Chamberlain was said to have provided Warhol with a large envelope filled with various archival crime photographs and mug shots.
Warhol elected to enlarge thirteen of them, which were silkscreened onto square Masonite panels, and tiled together. The work was installed on April 15, 1964, and triggered numerous objections. It was painted over two days later, before the event had opened.
Press reports from the time initially suggested that Warhol was dissatisfied with the installation but it was later revealed that Rockefeller - no stranger to censoring artists - himself had demanded the work be removed. In addition to the piece featuring thugs and criminals (a baby killer among them) seven of the men were Italian and the governor balked at alienating that community while running for re-election.
A 2014 exhibition commemorating the saga featured a telegram from Warhol to the NY State Dept of Public Works,  giving permission to paint over the canvas:
Gentlemen:
This serves to confirm that you are hereby authorized to paint over my mural in the New York State Pavilion in a color suitable to the architect.
Very truly yours,
Andrew Warhol
Other accounts cite Warhol's choice of silver paint being related to his tin foil and mirror covered walls at the Factory, which he was putting together at the time.
Warhol also produced a replacement for the mural, 25 identical Masonite panels each depicting the smiling face of World’s Fair President Robert Moses, who was likely to have been thought of as the main censor to the project at the time. It was never installed and its whereabouts are currently unknown.
A couple of years later he revisited the 13 Most Wanted screens, using them to produce a series of diptych paintings on canvas, which were exhibited at the Sonnabend Gallery in Paris. This publication - rare enough to not be included in the multi-volume catalogue raisonné - is from that exhibition. It includes six loose leaves featuring exhibition documentation, a text by Otto Hahn and a silkscreen portrait of Most Wanted Men No. 11, John Joseph H., Jr.
Warhol enjoyed a good double-entendre and the use of the word "Wanted" in the title undoubtedly referred not only to the criminals' fugitive status, but also their desirability and potential to be seen as
heartthrobs. A later work,  the screen test film The Thirteen Most Beautiful Boys - makes the connection clearer.
Morrissey carried this torch forward, with his use of vintage portraits repurposed as album cover art and band shirt graphics, as well as his glamorization of criminals such as the Kray Twins.
Note: Robert Indiana's project was also 'censored' from the fair shortly after it opened. Apparently his EAT sign was misconstrued by fair goers as an announcement that the building contained a food court. 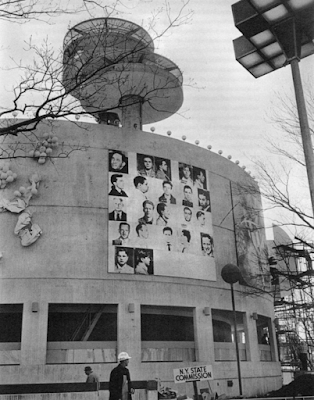 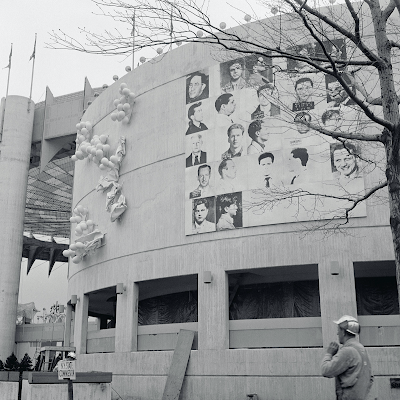 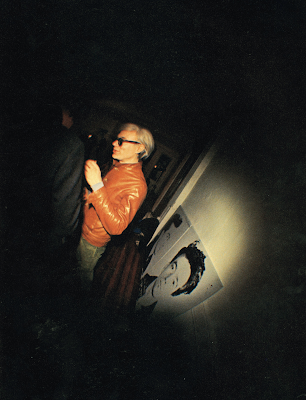 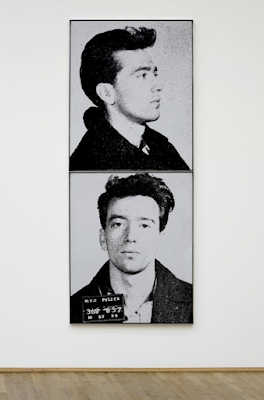 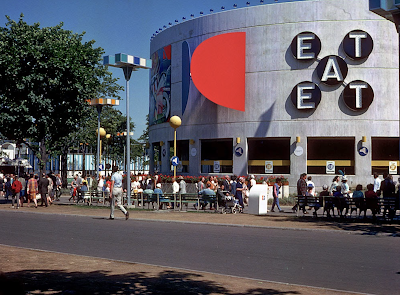