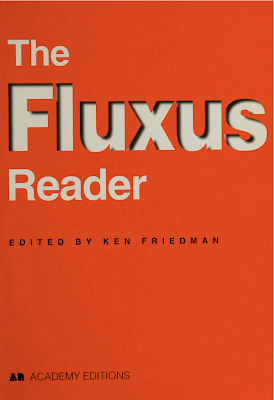 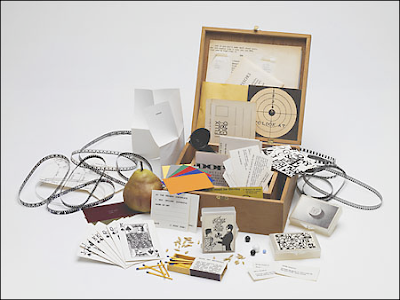 The Fluxus Reader, edited by artist and Fluxus scholar Ken Friedman, was the first widely available text on the subject. I bought my copy the year it was released, in 1998, at a local Chapters, I think, for less than forty dollars. It was one of the first titles on my then Fluxshelf that I didn't have to hunt down and/or pay through the nose for. It's served as a handy reference ever since, and because I periodically see it elsewhere, I had no idea that it's online price is now somewhere between three and four hundred dollars.

To counter this inaccessibility, and to celebrate the 50th anniversary of Fluxus, the Swinburne University of Technology has released a free digital copy of The Fluxus Reader. It can be downloaded in it's entirety, as a 36.7 MB PDF, or chapter by chapter. This is in keeping with Friedman's larger agenda of fostering networks and keeping information flowing. I wrote to him over fifteen years ago, and he responded with a parcel of books, and folder holding more than a hundred printed pages, containing the mailing addresses of hundreds of artists associated with Fluxus.

The book contains texts by Friedman, Dick Higgins, Hannah Higgins (daughter of Alison Knowles and Dick Higgins, and author of Fluxus Experience [2002]), Owen Smith, Simon Anderson, Stephen Foster, Larry Miller and others. One of Miller's two contributions is the transcription of an interview he conducted with George Maciunas on the 24th of March, 1978, less than two months before his death at age 46. The book also features an interview with Maciunas' widow, Billie Hutching. Lastly, the volume includes an extensive chronology and list of works.

It can be downloaded here: http://researchbank.swinburne.edu.au/vital/access/manager/Repository/swin:9624

Thanks to Kirk Rader for the heads up.
Labels: Fluxus, Ken Friedman