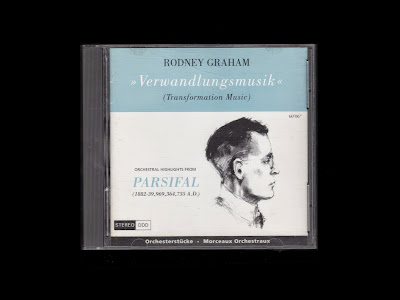 
Subtitled Orchestral Highlights from Parsifal (1882-39,969,364,735 AD), this conceptual exercise remains one of my favourite artworks ever, and is tied for my very favourite artist's recording (with Gavin Bryars' The Sinking of the Titanic).

The work originates from a story Graham had read about the composer Richard Wagner and the 1882 rehearsals of Parsifal in Bayreuth. The curtain-puller for the play was having trouble closing them on time, so Wagner was asked to compose some additional music to smooth over the transition. He refused, reportedly declaring "I do not write music by the meter."  (I'm unable to separate the anecdote from Max Von Sydow's tortured painter in Woody Allen's Hannah and her Sisters, indignantly proclaiming "I don't sell my work by the yard!").

Fortunately for the producers, Wagner's assistant Engelbert Humperdinck (the namesake of the 1960's crooner) was happy to oblige. His additions to the score were accepted by Wagner, used for the first few performances, but eventually dropped after the curtains were altered and the stage machinery was overhauled.

Graham hunted down these obscure excised bars and upon further investigation determined that Humperdinck had actually composed no new music, but rather manipulated the existing score so that the piece could loop back on itself. Graham recognized the similarity to his own 1983 work Lenz, in which he takes the reoccurrence of a phrase within the first five pages of a novel, and re-typesets them to facilitate a narrative that could loop back upon itself, mirroring the story of the protagonist, who is continuously retracing his own steps.

By returning the extra bars of music to the score of Parsifal as a progression of repetitions, Graham was able to create a series of asynchronous loops that would not resynchronize for 39 billion years. He attempts to pinpoint the exact time that the work would conclude (7:30 pm on June 18th), but the CD liner notes include a letter from Alan H. Batten of the Herzberg Institute of Astrophysics suggesting that an accurate calculation would be impossible. He goes on to list the problems with the speculation, not the least of which is the likelihood that long before that time the sun will cease to shine.


Alongside his art career (and often intermingling with it), Graham has been a prolific songwriter and performer. He was a member of the late-seventies post-punk/new wave band U-J3RK5 (with artists Ian Wallace, Jeff Wall and others) and has released several LPS of songs, including The Bed Bug, Love Buzz (2000), Getting It Together In The Country (2000), Rock is Hard (2003), Never Tell a Pal a Hard Luck Story (2005) and Why Look for Good Times (2008). In 2007, JPRingier released The Rodney Graham Songbook (available here).

The Rodney Graham Band consists of Graham on guitar and vocals, Dave Carswell on bass, Paul Rigby on guitar , mandolin and pedal steel, and Pete Bourne on drums. The group have performed in cities such as Berlin, Glasgow, London, New York and Paris. I believe the last time they played in Toronto was over a decade ago, in 2004, when Art Metropole and the AGO presented a concert at the Gladstone hotel (see below poster, which I think was designed by my then-colleague at AM, Pete Gazendam). Somewhere in my files I have Graham's set-list scrawled on the back of one of these photocopied handbills.

Tomorrow night Art en Valise hosts a performance of the band at The Great Hall from 8 to 10pm. Art en Valise identify as art lovers (not dealers or curators), and are "dedicated to introducing Canadian audiences to new ideas in the contemporary visual arts." The group consists of Paul Marks, Liza Mauer and Elisa Nuyten. Visit their website, here.

Tickets are $40 with a 50% discount for artists and students. They're available here. 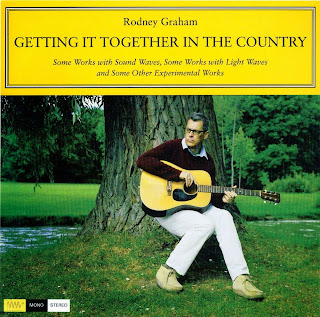 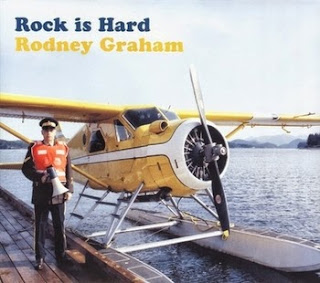 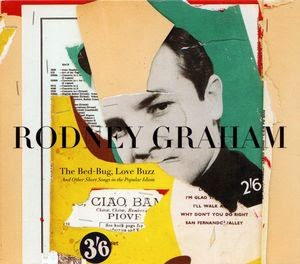 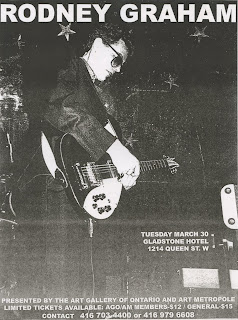 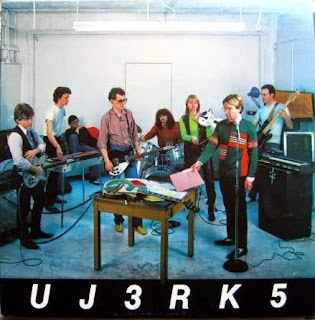