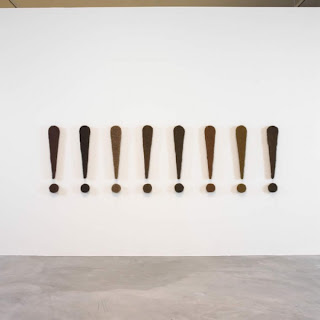 From the brief announcement/obituary at the Gagosian site:

"With great sadness we acknowledge the death of Richard Artschwager at the age of 89, just days after his second Whitney Museum retrospective “Richard Artschwager!” ended. For more than five decades, Richard forged a richly maverick path, confounding the genres and limits of art while forever changing how we view and understand space and the everyday objects that occupy it. His work has been the subject of many important exhibitions, including the Whitney Museum of American Art, New York (1988 and 2012–13); Centre Pompidou, Paris (1989); Deutsche Guggenheim, Berlin (2003); and Kunstmuseum Winterthur (2003) and is included the permanent collections of museums worldwide, including the Museum of Modern Art, New York; Art Institute of Chicago, Museum Ludwig Cologne, and Fondation Cartier pour l’art contemporain, Paris. “Richard Artschwager!” will tour to the Hammer Museum, Los Angeles and the Haus der Kunst, Munich later this year.

We are honored to have been involved professionally and personally with Richard for so many years, and to be witness to his life-enhancing art.

Our heartfelt thoughts are with Richard’s wife Ann and his children Eva, Clara, and Teddy Artschwager."