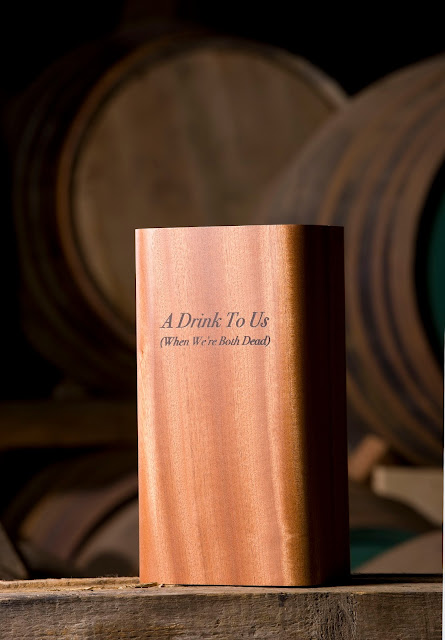 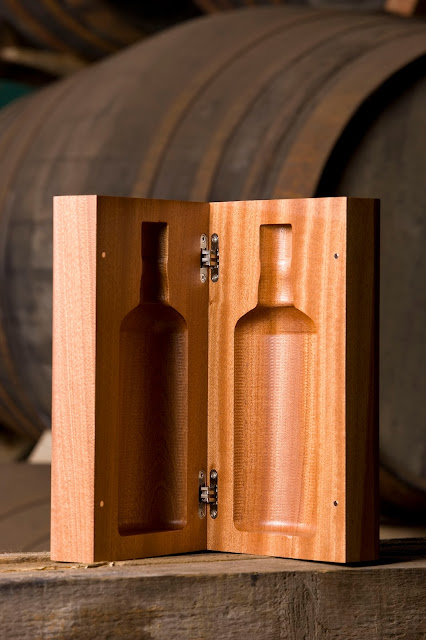 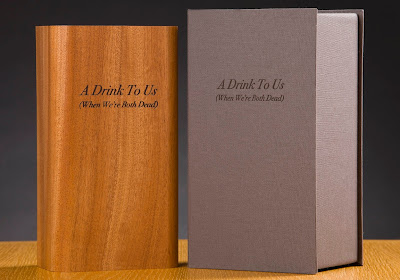 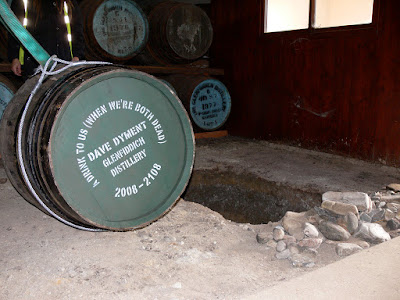 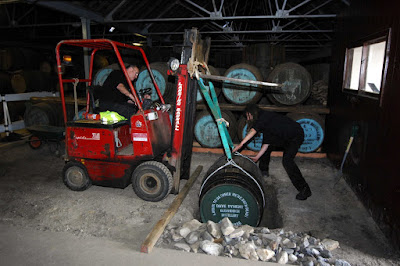 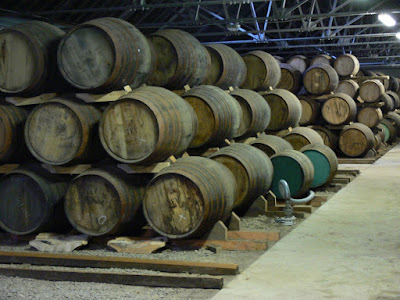 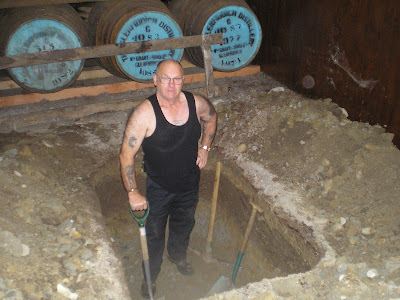 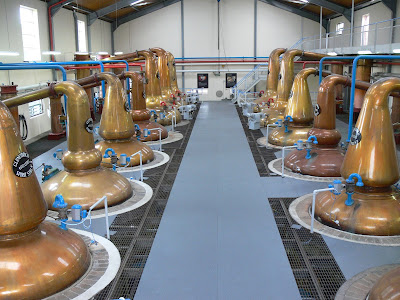 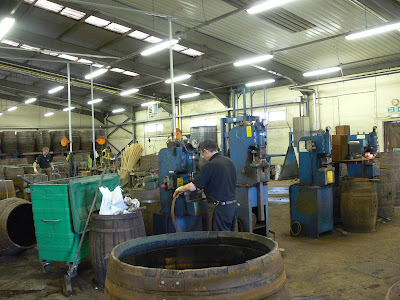 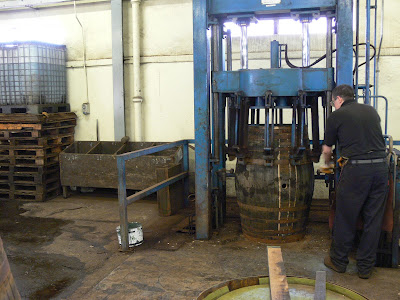 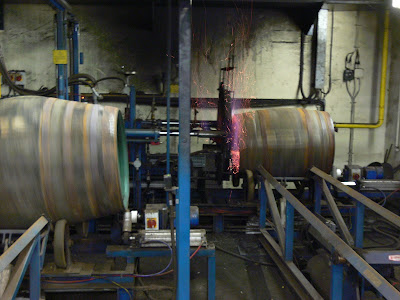 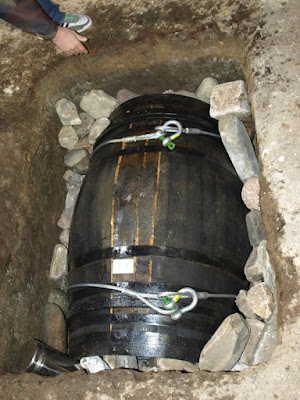 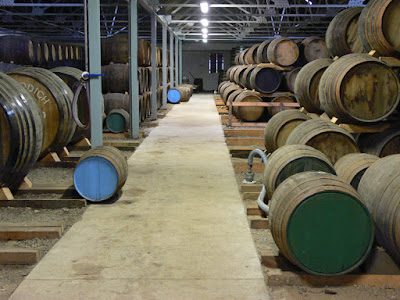 
A Drink To Us [When We're Both Dead] functions as memento mori, examining notions of trust, history, patience and mortality. The works consists of a specially designed casket of whiskey buried in Dufftown, Scotland for one hundred years, but pre-sold to the consumer now in the form of a lavishly designed, but ultimately empty, container. This edition consists of an extruded sapele box housed in a linen box which also includes a bookwork, postcard, map and contract.

In 2108, descendants of purchasers will be able to claim (via the map and contract) a one hundred year old bottle of scotch. Currently the most expensive scotch is a 64 year old bottle that sold at Sotheby's a few years ago for $460,000.

The work was produced in 2008, when I was in Scotland as part of the Artists In Residence program at the Glenfiddich Distillery. I think I was the third or fourth Canadian to attend. Annie Pootoogook and at least one other preceded me, and I was followed by  Rhonda Weppler & Trevor Mahovsky, Daniel Barrow, Myfanwy MacLeod, Damian Moppett, Helen Cho, Jon Sasaki and others.

When I attended it was an invitational residency, as I believe it still remains for other countries. But for the last several years the program has issued an open call in Canada. I have sat on that jury each year, and this year have been helping to administrate. If it's useful to demystify the process, here's how it works:

Artists are asked to submit a short proposal, a current CV, a short artist statement and between 5 and 15 images (or 3 minutes of video). This information is to be uploaded into a single package on a file sharing service (Dropbox, for example). The jurors will access these documents separately over the next several weeks, so the files must remain active.

Around 200+ applications are typically received. The jury consists of myself, Sara Diamond (President of OCAD University), Gaetane Verna (Director of The Power Plant),  Kitty Scott (Curator of Modern and Contemporary Art at the Art Gallery of Ontario), Adelina Vlas (Associate Curator of Contemporary Art at the AGO), Kristy Trinier (Curator at the Art Gallery of Alberta), Sarah Robayo Sheridan (Curator of the Justina M. Barnicke Gallery), and Stefan Hancherow (Director of the Feature Art Fair). Despite being based primarily in Toronto (other than Kristy Trinier in Edmonton) the group was chosen for their connections to various other communities (Montreal, Banff, Halifax, Calgary, etc.).

Each juror assigns a numeric value to their top twenty choices. These are then collated to arrive at a short list of ten artists. The list of ten is sent to the curator of the program, Andy Fairgrieve (pictured above, wrestling a barrel), who makes the final selection, after a couple of weeks of research.

Artists are asked to define how they will "be inspired by the distillery environment and possibilities that can be explored during the residency period; this could be anything from the accumulation of family heritage, the community of craftsmen who have worked there for decades and the materials they employ, or the artist’s wider personal development that will come over this inspiring three month period." This does not mean artists are expected to make a work about whisky. After I was invited in early 2008, I was asked to submit an outline of the type of project I might work on while on site. I wrote:


"When researching existing long pieces of music I came across the work of a Scottish composer named Ronald Stevenson. His work Passacaglia is often called the longest piece of music composed for piano (it isn't, actually, but that doesn’t matter for my purposes). The piece is 80 minutes long and it was this quote that most appealed to me:

So what I propose to do is to get a hold of a copy of the score for this work, conduct some research and rewrite the work to last a year and a quarter."


So my proposed piece was a musical interpolation that had nothing to do with the site, other than the heritage of the composer. A few things changed my plans when I arrived. The first was that I decided I wanted my work to exist in one of the warehouses (above, final image) rather than the visitor centre. Secondly, I elected to make a work that could only be done there, not something I could make from my bedroom at home (and why get stuck in your bedroom in beautiful north Scotland?). Glenfiddich's lawyers were initially opposed to the replacement project, and I had to convince the legal team that it wouldn't be a future liability. Luckily lawyers are paid to imagine every possible future outcome, so inherently understood the nature of the piece.

Last year Jon Sasaki built and flew an airplane during his time in Dufftown (the resulting videowork is currently on view at the Art Museum of the University of Toronto).  The point is that Fairgrieve is a smart curator and is looking to provide opportunities to make good work. The paragraph about inspiration should not be misconstrued as a request to pander.

The deadline to apply is this Sunday, January 31st. It's an incredible residency, and the time I spent there was among the best three months of my life. Artists are given airfare, accommodation (a beautiful two or three bedroom cottage to themselves), a salary and a generous production budget. The total value of the prize is estimated at $20,000 CDN per artist, though I suspect this fails to factor in other costs and it's actually worth considerably more.

When I arrived three bottles of scotch awaited me on the kitchen table and the fridge was stocked with Canadian cheese. The team are incredible hosts. There are several other artists from around the world participating at the same time (between June and September) so it's an isolated but not lonely experience. The staff at the distillery are incredible and very helpful. I arrived back in the country to dig the hole to bury my casket only to discover that the warehouse manager, Eric, had done it for me (see above), on his own time.

I can't recommend it highly enough, and there's no cost to apply. Please share this with any eligible artist working in Canada: