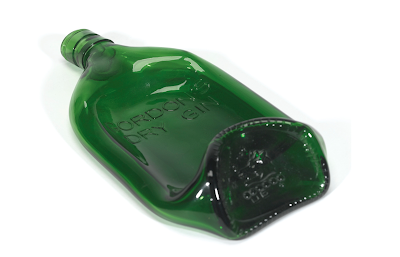 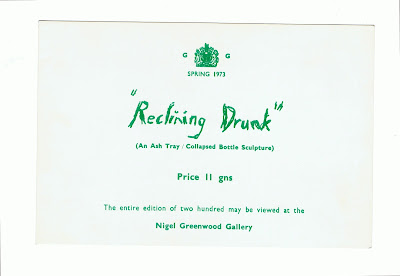 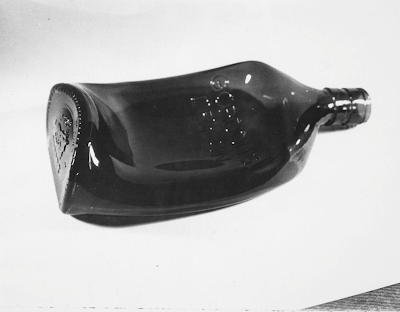 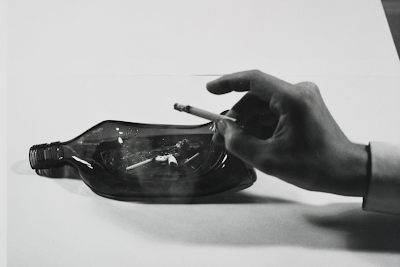 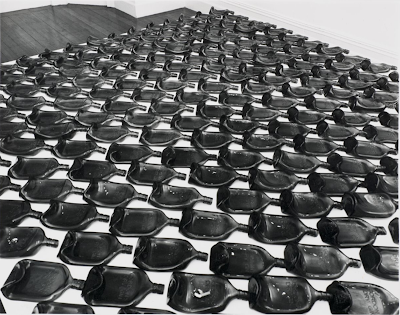 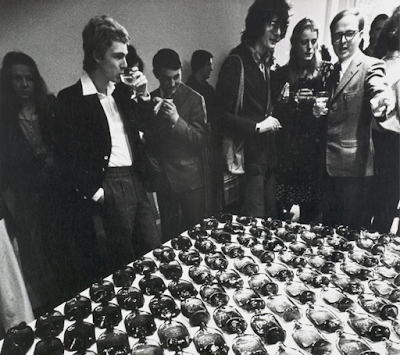 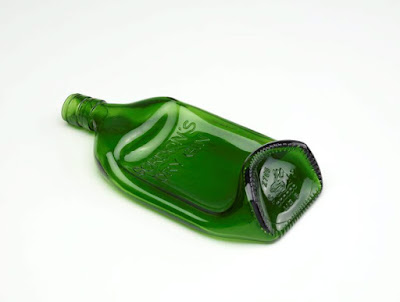 This ashtray/collapsed bottle sculpture was auctioned at Sothebys last year for £5000. Four years prior a Christies auction fetched £4,375 ($6,869 US).

In an obituary for potter Reg Moon (written by his daughter Carey Moon) published in the Guardian, here, Moon is credited with creating these, and Gilbert and George are said to have bought "a gross" of them. However, Carey Moon attributes them to the mid-eighties, a decade after the Gilbert & George event pictured above.

Most other online references to either Moon or the work quotes from this source, but further research turned up the following information:

"Between 1969 and 1971 local artist Reg Moon made hundreds of Squashed Bottle Ashtrays in the pottery at the rear of the Torquil Shop in Henley-in-Arden.

Reg enjoyed his gin and one day (maybe after one too many) he tried firing an empty gin bottle in the kiln. The result was a rather pleasing “Squashed Bottle”. After much experimentation, Squires gin bottles seemed to melt into the most aesthetically pleasing Salvador Dali-like shape, which could be used as an ash tray.

They proved to be very popular so Reg began to buy the empty bottles by the gross from the manufacturer. They were on sale in the shop for 7s 6d (about 35p) but also distributed wholesale to other shops around the country, including Heals in London. Soon the whole family (including daughter & son aged 11& 13) were engaged in wrapping and packing these bottles into specially made cardboard boxes which had “The Squashed Bottle” printed in purple all around.

One day Reg received a phone call from a very well spoken gentleman called Gilbert (or was it George) who wanted to order a gross or 2 of these bottles. Reg had never heard of this couple but of course, Gilbert & George were emerging artists of the time and to become household names in the 70s, with their slogan ‘Art for All’. They adopted the identity of ‘living sculptures’ in both their art and their daily lives, becoming not only creators, but also the art itself.

Reg therefore decided to deliver the consignment himself, so drove down to London in his Landrover with his then assistant, Patty. They found their way to the Fournier Street address in East London. Reg was cordially greeted by the artists and when he presented his bill, George said “My dear man, there seems to be no charge for carriage”. Reg implied that it was ok, but they insisted and suggested that the price could be in guineas instead of pounds to compensate for the carriage costs. And the deal was done!

Being the talented and innovative artist that he was, Reg soon tired of melting hundreds of glass bottles every day and went on to become one of the country’s best studio potters of his generation. How surprised and tickled he would have been to hear that a Squashed Bottle Ashtray, produced here, then signed and numbered by Gilbert and George recently sold at Sotheby’s for £4,750!!

Although Reg passed away in 2009, the Torquil pottery in Henley-in-Arden continues in the capable hands of daughter Carey Moon who also runs “The Gallery Upstairs” with her brother Paul. They too are now promoting “Art for All” by running ceramics workshops and courses to the general public at Torquil year round. They also hold two art exhibitions each year featuring work from little known emerging and nationally renowned artists alike. Their next exhibition opens on May 24th 2011."