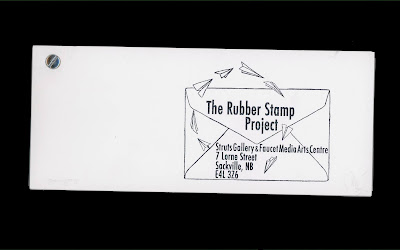 The Rubber Stamp Project began in 1996 when then-Director of Struts Gallery Gregory Elgstrand began commissioning artists to create works which could be stamped onto all outgoing mail from the centre for three months. The only stipulation was that the work had to fit on the back of a standard #10 envelope.

The series began with a somewhat incendiary text by Michael Fernandes that tackled the context directly: THE ROLE OF THE ARTIST RUN CENTRE IS TO BRING DOWN THE GOVERNMENT. It was soon followed by a similarly forthright work by Barbara Sternberg that read BUSINESS IS BUSINESS, CULTURE IS NOT BUSINESS.

While many of the initial works were text-based, artists such as The Royal Art Lodge, Jon Claytor, Daniel Barrow, Shary Boyle, Erik Edson and others contributed illustrative work to the series.

It's available from the publisher, here, for $10 CDN. The following dozen or so posts will feature stamps from the book.