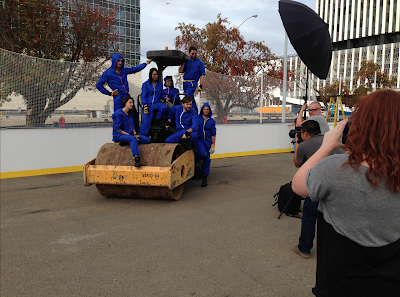 Above: vsvsvs in their new gear, atop their steam roller, in their recently built hockey rink, posing for the cover of this weekend's Metro newspaper.

Make it Flat takes place at 104a Avenue and 100 Street (just west of the CN Tower, in front of the Epcor building, next to Brandon Vickerd's Dance of the Cranes).

"vsvsvs, a Toronto collective of seven artists, are known equally for their elaborate DIY constructions as for their playful acts of destruction. On a temporary purpose built hockey rink, a steamroller replaces the Zamboni, which indiscriminately levels any object placed in its path. Items selected by the artists range from ramps, ceramics, lightbulbs, yoga balls, air-mattresses, toothpaste tubes and bubble wrap etc., are continually arranged, destroyed and rearranged over the course of the night. The project aims to use the act of destruction as a generative gesture and as an aesthetic spectacle.

Pronounced ‘versus versus versus’, the seven-person collective and artist-run centre based out of a warehouse in the Portlands of Toronto have been working together since 2010. Current members include Anthony Cooper, James Gardner, Laura Simon, Miles Stemp, Ryan Clayton, Stephen McLeod and Wallis Cheung. Their activities encompass collective art making, a residency program, a formal exhibition space, and individual studio practices. The group’s collective work focuses on the collaborative production of multiples, drawings, video works, sculpture, installations, and performance.