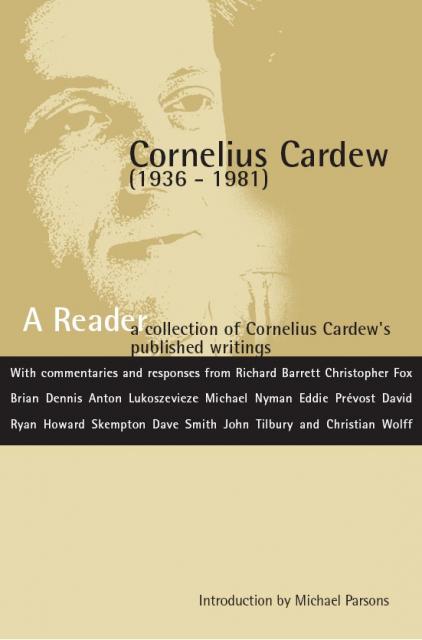 "The English composer Cornelius Cardew [1936-81) was among the most adventurous, controversial and innovative musicians of his generation. After an initial association with Stockhausen and the European avant-garde, he became engaged with the aesthetic ideas of John Cage and the New York School. A leading figure in the experimental music of the 1960s, Cardew is widely acknowledged as a pioneer of indeterminacy, graphic notation, free improvisation and performer involvement. As well as extending the boundaries of music in unprecedented directions, he enquired deeply into its social relevance and meaning. His passionate and untiring quest for wider social significance led him eventually to become a political activist.

In the 1970s he repudiated his earlier experimental work and adopted a more traditional musical language. He joined a revolutionary Marxist-Leninist party and devoted himself to political action, at the same time searching for ways to express his commitment in musical terms.
At the height of his political involvement he died tragically at the age of 45, killed by a hit-and-run driver near his home in East London.

This Reader brings together a diverse collection of Cardew’s major essays and writings from different stages of his career, together with commentaries by other writers associated with his work. It reflects developments, changes and contradictions in his thinking about music from the late 1950s to the end of his life. As a companion volume to John Tilbury’s biography — Corneius Cardew a life unfinished, Copula, 2006 (ISBN 0 9525492 3 9) it provides essential material for the study of Cardew’s life and ideas; it also makes a significant contribution to discussion of the wider issues involved in the relationship between music, ideology and political commitment."