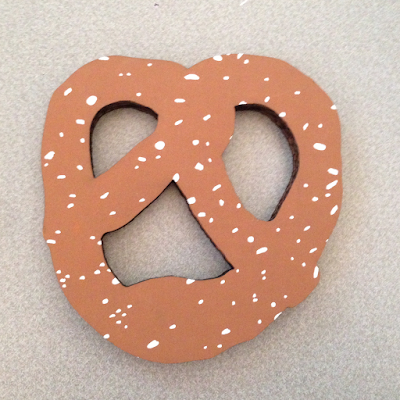 Intended as an unlimited edition (each somewhat unique) and selling for around $50 US, production on the project ceased several years ago and (despite the high number produced) the work is now valued at around $700 US.

“The N.Y.C. Pretzel was developed in response to the request for a special unlimited multiple edition for sale during the exhibition of a historical survey of multiples organized by the Deichtorhallen in Hamburg.

Outside our studio window in New York City each day a vendor rolls out his wagon to offer toasted pretzels, one of many providing quick lunches along Varick Street in the center of the New York printing industry. The wagons display oversize color reproductions, and sometimes three-dimensional versions of the bread.

The pretzel seemed a perfect multiple of the city, as characteristic of a particular place as the Fireplug had been of Chicago. Furthermore, it had a precedent in the development of the Knackebrod.

The request for the multiple coincided with my resolution to dispose of numerous large sheets of three-ply cardboard which had accumulated from past projects in my garage. These had been mainly used for laser-cutting scripts and figures in the model From the Entropic Library (1980-1990). The idea arose to laser-cut the Pretzels from the three-ply cardboard and silk-screen on the shape, a procedure linking the subject further to the paper and reproduction concerns of the neighborhood. Besides, as I knew from previous experience, the laser-cutting would leave a burnt odor, recalling bakery production, but also the odor of toasted chestnuts sold on the street next to the pretzels, which pervaded the air of afternoons near the Holland Tunnel.

I asked David Platzker, my assistant, to go out and buy a representative pretzel on the corner, and used this to develop a pattern for the multiple, which was faxed to the laser-cutting factory in Connecticut. They also received the cardboard residue of the garage, which turned out with economical distribution to yield more than 1000 pretzels.

Since a N.Y.C. Pretzel is nothing without its “salt” - large white crystals stuck to the surface - a drawing of these in six variations was developed and silk-screened on one side over a mat brown color in a nearby studio. A rubber stamp signature completed the piece, and the first group of the multiples was hand-carried by Platzker with instructions to show them threaded on dowel sticks in the New York Style of presentation.”