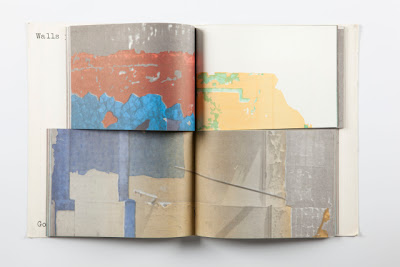 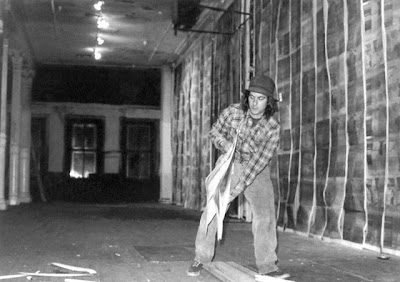 
"Wallspaper is an artist’s book published in 1973 which relates to Gordon Matta-Clark’s multi-part installation Wallspaper 1972. The book comprises reproductions of the coloured prints that the artist used to make the installation, which were themselves derived from black and white photographs.

Wallspaper is a multi-part installation comprising photographs and newsprint, which Gordon Matta-Clark presented at the artist-run space 112 Greene Street in New York in 1972. Earlier that year, he took various black and white photographs of derelict and semi-demolished project houses in the Bronx and the Lower East Side of New York City. As only the facades of the buildings had been taken down, the photographs reveal the interior walls of the houses. Some of these walls were covered in paint that was flaking away; other walls were covered in wallpaper. Matta-Clark used the photographs to create his installation. First he heightened the colours of the photographs to abstract the images of the derelict houses. Next he printed the photographs on long strips of newspaper and hung these strips on a large wall from ceiling to floor. The wall consequently looked as if it were ‘wallpapered’ with images derived from walls in another part of New York City. The installation also included a stack of newspaper booklets which viewers were able to take away. These booklets were made of individual sheets of newspaper, each presenting one photograph of the Bronx walls. A number of the original black and white photographs from which the installation derived also survive.

Matta-Clark only presented Wallspaper once during his lifetime, and the long strips of newspaper hanging from the wall were destroyed some time after the Greene Street show. The work now consists of seventy-two individual sheets that had originally been in the bundles of newspapers placed in front of the wall.

Wallspaper was one of the first works in which Matta-Clark’s interests in photography come together with his explorations of the built environment. For art historian Thomas Crow, the crucial significance of the work is the way in which the photographs distort the images of derelict housing, and therefore conjure a space of reverie. Crow implies that the piece produces a new means of representing dilapidated architecture, quite distinct from traditions of socially-concerned documentary photography in New York City:

He hung strips of paper printed with close-up photographs of peeling and crumbling walls from derelict buildings in the Bronx and Lower East Side. With the delicacy of watercolour or Japanese prints, he subjected cropped and enlarged segments of his photographs to a newly free manipulation of colour and tone. [The work] registered a gritty streetscape while simultaneously conjuring some other, imagined space closer to reverie and dream. While another bundle of prints lay on the floor as an object analogue, the cascade descending from the ceiling points to [Matta-Clark’s] growing readiness the manipulate the photographic document in the direction of suggestion and secondary illusion.

Art historian Pamela Lee has a different approach to the work. For her, what is most interesting is the way in which Matta-Clark transposed images of one set of buildings onto the walls of another building. Encountering the piece involved not only thinking about the buildings pictured on the newspaper strips, but the building in Greene Street where the work was presented, and the relationship between the gallery and the derelict house. Lee has written:

Picturing the exposed walls of lower income housing, the photographs present the buildings’ ruinous state as a gridded, blank-faced visage. [At Greene Street] Matta-Clark registered an acute correspondence between walls and wallpaper, not unlike the floorpieces exhibited before. Its effect was to throw the still functioning site of the gallery into a certain relief, locating the outmodedness of a building elsewhere by reproducing the structures of its walls on another building’s surface. As such, the relationship between the respective sites was not conditioned simply by the place of art and architecture, but by the uneven temporalities of both. The timeliness of each building – one now ‘alive’, the other now ‘dead’ – spoke to the virtual ‘speed’ of the built environment, the endlessly fluctuating historicity of its architecture.

Much of Matta-Clark’s work addresses public space and the built environment, often drawing attention to the ways in which architects failed to address the housing crisis in New York in the 1970s. Having trained as an architect himself, he created an artistic practice that targeted this discipline. His best known works are the ‘cuts’ into buildings which he made in New York, New Jersey and in Europe. These actions led to related films, photocollages, drawings, and sculptures." - Tate Modern site.