Henry Flynt | Down With Art! 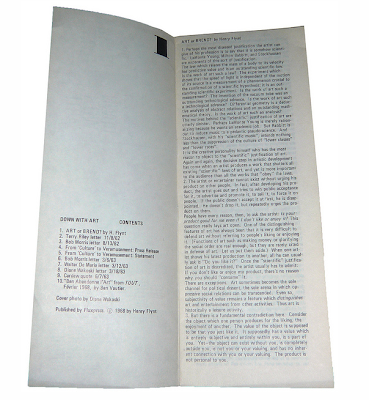 Flynt's first solo publication (his Concept Art essay appeared in An Anthology in 1963 and he contributed to Wolf Vostell's décollage the year prior) features his Art or Brend essay (see below), as well as artists' statements by Terry Riley, Robert Morris, Walter De Maria, Diane Wakoski and Ben Vautier.

1. Perhaps the most diseased justification the artist can give of his profession is to say that it is somehow scientific.

It is the creative personality him- or herself who has the most reason to object to the "scientific" justification of art. Again and again, the decisive step in artistic development has come when an artist produces a work that shatters all existing "scientific" laws of art, and yet is more important to the audience than all the works that "obey" the laws.

2. The artist or entertainer cannot exist without urging his or her product on other people. In fact, after developing his or her product, the artist goes out and tries to win public acceptance for it, to advertise and promote it, to sell it, to force it on people. If the public doesn't accept it as first, he or she is disappointed. He or she doesn't drop it, but repeatedly urges the project on them.

People have every reason, then, to ask the artist: Is your product good for me even if I don't like or enjoy it? This question really lays art open. One of the distinguishing features of art has always been that it is very difficult to defend art without referring to people's liking or enjoying it. (Functions of art such as making money or glorifying the social order are real enough, but they are rarely cited in defense of art. Let us put them aside.) When one artist shows his latest production to another, all he can usually ask is "Do you like it?" Once the "scientific" justification of art is discredited, the artist usually has to admit: If you don't like or enjoy my product, there's no reason why you should "consume" it.

There are exceptions. Art sometimes becomes the sole channel for political dissent, the sole arena in which oppressive social relations can be transcended. Even so, subjectivity of value remains a feature which distinguishes art and entertainment from other activities. Thus art is historically a leisure activity.

3. But there is a fundamental contradiction here. Consider the object which one person produces for the liking, the enjoyment of another. The value of the object is supposed to be that you just like it. It supposedly has a value which is entirely subjective and entirely within you, is a part of you. Yet--the object can exist without you, is completely outside you, is not your or your valuing, and has no inherent connection with you or your valuing. The product is not personal to you.

Such is the contradiction in much art and entertainment. It is unfortunate that is has to be stated so abstractly, but the discussion is about something so personal that there can be no interpersonal examples of it. Perhaps it will help to say that in appreciating or consuming art, you are always aware that it is not you, your valuing--yet your liking it, your valuing it is usually the only thing that can justify it.

In art and entertainment, objects are produced having no inherent connection with people's liking, yet the artist expects the objects to find their value in people's liking them. To be totally successful, the object would have to give you an experience in which the object is as personal to you as your valuing of it. Yet you remain aware that the object is another's product, separable from your liking of it. The artist tries to "be oneself" for other people, to "express oneself" for them.

4. There are experiences for each person which accomplish what art and entertainment fail to. The purpose of this essay is to make you aware of these experiences, by comparing and contrasting them with art. I have coined the term `brend' for these experiences.

Consider all of your doings, what you already do. Exclude the gratifying of physiological needs, physically harmful activities, and competitive activities. Concentrate on spontaneous self-amusement or play. That, is concentrate on everything you do because you like it, because you just like it as you do it.

Actually, these doings should be referred to as your just-likings. In saying that somebody likes an art exhibit, it is appropriate to distinguish the art exhibit from his or her liking of it. But in the case of your just-likings, it is not appropriate to distinguish the objects valued from your valuings, and the single term that covers both should be used.

These just-likings are your "brend." Some of your dreams are brend; and some children's play is brend (but formal children's games aren't). In a sense, though, the attempt to give interpersonal examples of brend is futile, because the end result is neutral things or actions, cut off from the valuing which gives them their only significance; and because the end result suggests that brend is a deliberate activity like carrying out orders. The only examples for you are your just-likings, and you have to guess them by directly applying the abstract definition.

Even though brend is defined exclusively in terms of what you like, it is not necessarily solitary. The definition simply recognizes that valuing is an act of individuals; that to counterpose the likes of the community to the likes of the individuals who make it up is an ideological deception.

5. It is now possible to say that much art and entertainment are pseudo-brend; that your brend is the total originality beyond art; that your brend is the absolute self-expression and the absolute enjoyment beyond art. Can brend, then, replace art, can it expand to fill the space now occupied by art and entertainment? To ask this question is to ask when utopia will arrive, when the barrier between work and leisure will be broken down, when work will be abolished. Rather than holding out utopian promises, it is better to give whoever can grasp it the realization that the experience beyond art already occurs in his or her life--but is totally suppressed by the general repressiveness of society.

Note: the avant-garde artist may raise a final question. Can't art or entertainment compensate for its impersonality by having sheer newness as a value? Can't the very foreignness of the impersonal object be entertaining? Doesn't this happen with my "Mock Risk Games," for example?

The answer is that entertainmental newness is also subjective. What is entertainingly strange to one person is incomprehensible, annoying or irrelevant to another. The only difference between foreignness and other entertainment values is that brend does not have more foreignness than conventional entertainment does.

As for objective newness, or the objective value of "Mock Risk Games," these issues are so difficult that I have been unable to reach final conclusions about them.
Labels: artist statement, Henry Flynt