Artists' Books and Multiples on TV #1: Harmony Korine on Letterman 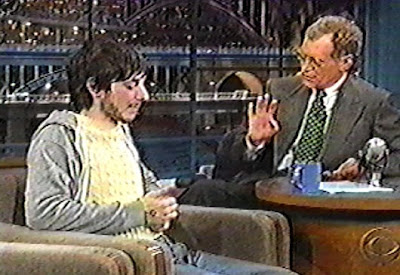 Harmony Korine's 1998 appearance on the Late Show with David Letterman is, as far as I'm aware, the first time anyone has appeared on a popular late night talk show to promote an artist's book. William Wegman was a guest of the Late Night with David Letterman show in the year of it's debut (1982) but the program had a later time-slot and a considerably smaller audience at the time. Also, the artist had the benefit of a cute performing dog (Man Ray) to accompany him.

Certainly Korine had some novelty value for the show's bookers - he wrote a screenplay in his teens (Larry Clark's Kids) and directed his first feature in his early twenties (Gummo). He had previously appeared on the show to discuss both of those projects and, despite his dismissive tone, it is clear that Letterman got a kick out of his fidgety charm and ability to name-check James Joyce and Snoop Dog in the same sentence. Perhaps Letterman was looking for a repeat of the publicity from some of his stranger guests in the past - like actor Crispin Glover (who appeared in character and tried to kick the host in the face) or underground comic book writer Harvey Pekar (who appeared 8 times, before being banned in the early 90's after some overt on-air criticism of parent company General Electric).

It's possible that Letterman relished the challenge of a conversation with Korine, with his rambling stories, tall tales and stoned non-sequitors.

Below is a partial transcript of the appearance.


Letterman: Tell us a little about your book, A Crackup at the Race Riots.

Letterman: This, by the way, is why they invented child-proof caps

Korine: It's my first novel. I wanted to write a...

Letterman: Are you a novelist?

Letterman: You're a filmmaker, I guess it doesn't make any difference, you're just a creative entity.

Korine: I just work a lot and (shrugs), I wanted to write the great American novel, or a novel, I just wanted it to be American.

Letterman: Now how long did it take you to write this book?

Korine: I think probably over a two year span. Two or three years.

Letterman: Now here I turn to page 59, we've got it clipped off here, and all I see on page 59 is the word "hepburn."

(Letterman holds the page open on the desk for the camera. Close-up of the book)

Korine: Yeah, that was going to be the first page, 'cause I wanted to write the great book of just one word but it ended up being on like (pointing to the book) something like page 67.

(Letterman is flicking through the book for a moment. Audience begins to laugh)

Letterman: (serious) How much this thing go for, Harmony?

Letterman: What are we talking about?

Korine: I think it's the regular book price.

Korine: I don't know, I don't like to, I never even, I can't imagine why anyone would buy a book nowadays

Letterman: Yeah, now would you buy this book, would you recommend people go out and buy it or not?

(audience laugh and then Letterman starts to laugh)

Letterman: Are you happy with this book or are you not happy with it?

Letterman: You couldn't recommend it though?

Korine: I'm the author, so it's hard, I wouldn't endorse it.

Korine: But not my own book, I would rather endorse someone else's book.

(some members of the audience laugh)

Letterman: Now who published this one?

Letterman: This is Doubleday, oh Doubleday, now are they pleased with the work?

Korine: Yep, they love it.

Korine: I mean, I think so.

Letterman: Yeah. Do you have a deal to write another book?

Letterman: So now you've done directing and writing, now which of the two do you prefer?

(Korine is looking at Letterman. He says nothing. Audience laughs. Letterman starts impersonating a child trying to open a safety cap. Korine laughs and looks around. Letterman screams "mom" to the side)

Korine: No, I like to do both, I think they're both nice, just some of the people i come into contact with I can't stand...

Letterman: Do you have a girlfriend…(realizing Korine may have been insulting him) oh some of the people you come in contact with you can't stand?

Letterman: They just kinda rub you the wrong way, huh?

(Harmony does a shoving motion to the side and then starts to laugh. Letterman taps at the desk)

Letterman: Yeah, because you know, (sarcastically) you're like a mouseketeer, who would have trouble with you, huh?

Korine: I don't know. It's not good. I could get sued.

Letterman: Paul, you got anything for Harmony?

(back to Korine and Letterman)

Letterman: Do you know Ruby Wax?

(Korine shakes his head. There is a silence for a moment and then he and the audience start laughing)

Korine: I never met him.

(there is a bada ching on the drums and the audience applauds. Harmony looks over to the band, smiling. Close-up on Paul and the band. Paul sallutes Harmony)

Letterman: Harmony, I'm about to say something I've never said to a guest before in the seventeen years we've been doing this. You go back to the hotel immediately right now (audience laughs) and take a long hot shower (audience laughs a little).

(Letterman is laughing. Letterman picks up the book. Harmony shrugs, looking at the crowd)

Letterman: The book is called A Crackup at the Race Riots. Harmony Korine wrote it although he can't really recommend. Harmony, nice to see you, thanks for being here.


The interview can be seen here. 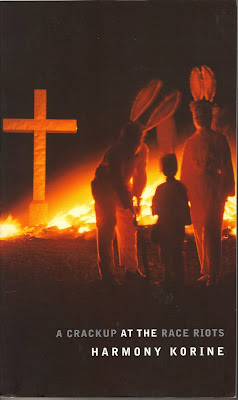 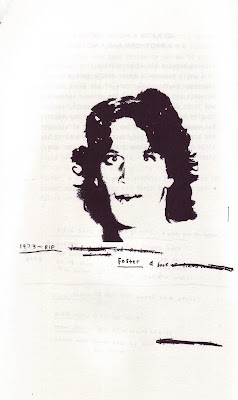 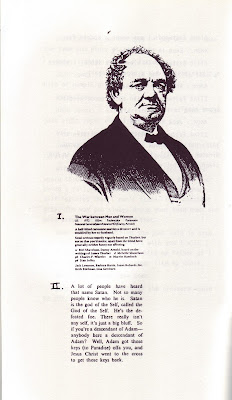 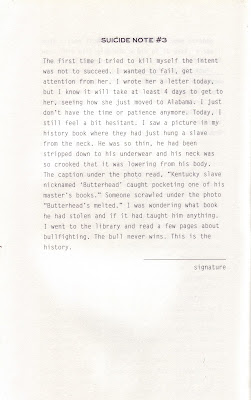 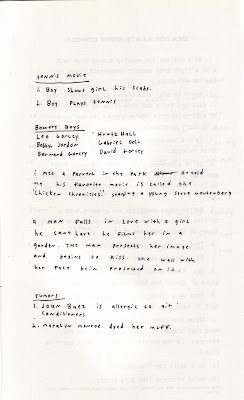 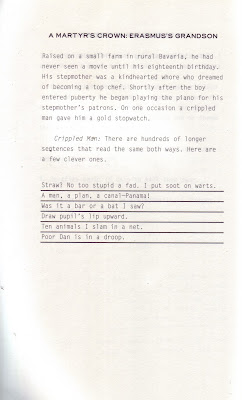