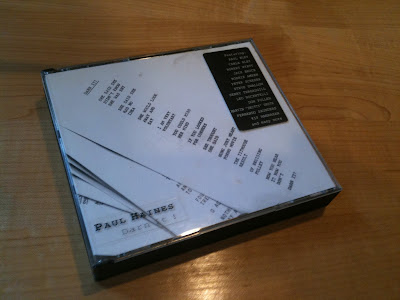 Yesterday I visited Michael Snow for an interview to be published in the spring issue of Magenta magazine. The focus was on his artists' books and records, a surprisingly under-explored area of his practice, given that he's produced a classic in each genre (The Last LP and Cover to Cover – which remains one of the most celebrated artists' book ever). Before I started recording our conversation he showed me an obscure CD compilation for which he had contributed musically, and designed the cover.

Titled Darn It!, the 1994 disk pays tribute to the late poet Paul Haines, who is best known for his lyric contributions to two of Carla Bley's most successful recordings, Escalator Over the Hill and Tropic Appetites. Haines died in 2003, at the age of seventy. His daughter Emily Haines is the leader singer and keyboard player for Metric, and is a member of Broken Social Scene.

The cover design, which features two pull-out accordion-fold inserts, keeps the focus on the lyrics, illustrating stacks of poems by Haines, including stanzas like:


Snow was given a single copy of the compilation and left unsure of it's fate, not even confident that it was ever released. It seems to have garnered a couple of reviews, though, and a few copies are floating around for sale (on Ebay, and elsewhere) ranging from twenty dollars to one hundred.
Labels: ACBA, artists' records, John Oswald, Michael Snow, Paul Dutton, Paul Haines