Agnes B and Harmony Korine - How They Met 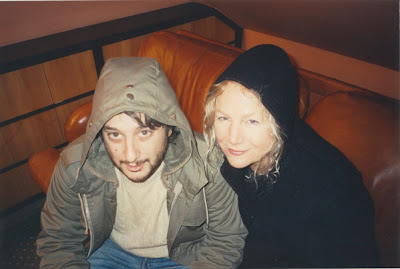 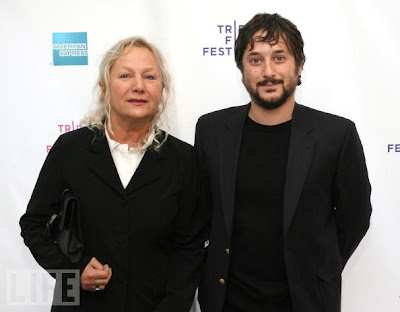 From The Independent Sunday (October of 2003):

HARMONY KORINE
The first time I set eyes on Agnes it was at the Venice Film Festival, in a lobby. She was going to a screening of Julien Donkey-Boy but she missed it. I didn't recognise her but I'd heard that she was interested in meeting me and I remember going by her shops when I was young and she'd always have Godard posters in the window and stuff like that.

I liked her immediately; there was something special about her. She's like a kindred spirit or something: very sensitive with artists. She had to go back the next day but we kept in touch and I went to Paris and stayed at her house, which was just incredible. She's got a good art collection and beautiful gardens and there was amazing food. I remember really good tomatoes. I was in Paris for about 10 months. I couldn't understand what anyone was saying but it was decent. I was on my own, in a strange state of mind and that was what I needed to go through. I'm still figuring it out. I wasn't that happy where I was.

She drives this old Cadillac and when all the Le Pen rallies were going on she went to vote to oppose Le Pen but I remember she was so disgusted with who she had to vote for to keep him out that she burnt her ballot in the car. Just driving around with a burning vote.
We started talking about doing this production company, O Salvation. She was really receptive. I didn't want a movie production company because I'm just as interested in writing books or art shows, stuff like that. She understood that I wanted to go off in different directions. I needed something that whatever I wanted to do I could do and get it out there. She's like the backer and I do what I want to do. She's very supportive. I'm not sure what's in it for her. It's a good question, beats me.

I met David Blaine at the premiere of Kids and he's one of my closest friends. Agnes made the clothes he wore during the stunt in London. She was there to see him go up and is here to see him come down. They get on good but then Agnes is not difficult to get along with, she's easygoing. She doesn't necessarily join in, she observes and then gives feedback. Not criticism just discourse. Agnes is like a sponge: she absorbs a lot and she has a big heart and I think it comes out of her in interesting ways.

She doesn't seem like a mum or a sister, she's like a friend. I think she's a beautiful woman, but there's never been anything romantic between us. She meets my girlfriends, but it's not like taking them home to meet mom or anything. She's a friend and I never feel any of the age stuff. It's never seemed awkward or bizarre.

AGNES B
I loved Gummo so much that I wanted to meet Harmony. So, in 1999 I went to Venice to see Julien Donkey-Boy and went to the hotel where he was staying. We met in the corridor, talked for about 15 minutes and became friends. I didn't know Harmony but I thought he was a beautiful person, very poetic: I like the way he moves, his gestures, and he's funny and smart. Very smart. Chloe Sevigny [the actress, Harmony's former girlfriend] was there too, and I love her very much. I don't know anything about the break-up but I'm sure they still love each other. I don't ask questions. Anyway, I ended up producing the subtitling for Julien Donkey-Boy so it could come out in France.

I'm shy, but we got on quickly and kept in touch; he'd write me notes and then told me that he'd like to come to Paris. He stayed about three months, last spring. He was working, writing scripts and he liked it in Paris because he was away from things and people. He wanted unknown places. He works a lot. He's very serious. It's like he has to do it.

When he was here we saw each other a lot. We'd have a sandwich downstairs, talk, listen to music. There is something between us, as if we are children together. It's not a question of being supportive, it's a question of friendship.

Harmony has settled down a lot in the past few months. He knew that he had to spend some time alone and I admire that. The only real difference between us is in ages, but the funny thing is that you don't notice it when we're together. It's not about me being a big French designer and him being a young American. There are no misunderstandings between us. We've never had an argument. Never ever. I'm not argumentative anyway but we respect each other. I show his work at the gallery, which we hung together and he asked me to write a long text on the wall.

I have five children but they're different to him. I'm much more of a fantasist than my children. They sometimes worry about my behaviour. But Harmony is a friend. We've set up this company and we're starting to produce things through that. We are working on a film, I'm going to the editing room to see what's going on, and I do my producing work.

He's given me T-shirts that he didn't want anymore, he's generous like that, and I gave him my favourite jacket, which he wears every day. I've given him shirts and things but he doesn't worry too much about how he looks. He's the sort of person who just wears what's on the floor in the morning, and I'm a bit like that too. I don't care too much, I always wear the same things. We're a little like children in a way. A bit like les enfants terribles.
Labels: Harmony Korine