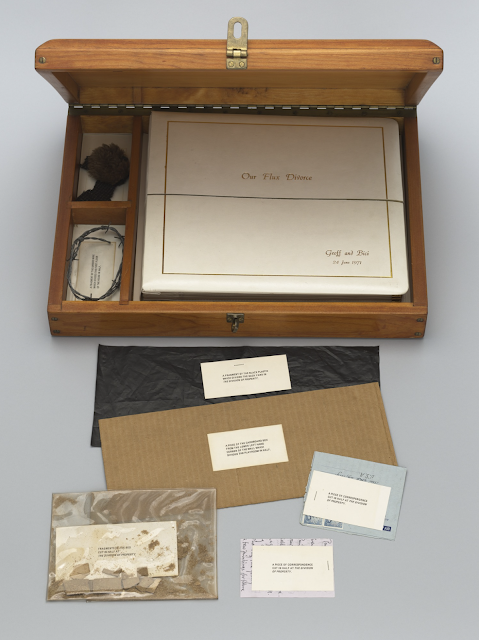 A boxed work documenting the artist's divorce from Nye Ffarrabas (formerly Beatrice Cobb Forbes, Bici Forbes, and then Bici Forbes Hendricks), in which all of their belongings were sliced in two. Items from their ten years of marriage - including documents, clothing, a love seat, and their marital bed - were cut in half with scissors, a paper cutter, an ax and a power saw.

Housed in a box crafted by woodworking graduate student, the work includes "Our Flux Divorce" which resembles a wedding album, and is also bisected, horizontally. Fragments of coats, barbed wire, plastic, correspondence cut in half, and half of a wedding announcement are also included. The documentation of the performative event is by Fluxus photographer Peter Moore. George Maciunas assisted with the design, and distributed the work through Fluxus.

When Maciunas married in 1978, Hendricks officiated (in a clerical robe) and the event can almost be viewed as the inversion of his divorce.


From an Oral history interview with Geoffrey Hendricks, 2016 August 17-18:

GEOFFREY HENDRICKS: With our 10th wedding anniversary coming along, it was like, How do we celebrate it? Because we were both, you know, queer and involved with others, and I just sort of tossed out the idea, what about a Flux-divorce? And it sort of resonated, and I said, "Let me talk to George Maciunas." And so I talked to George. He was absolutely thrilled and so he did a lot of the orchestrating of it, and figuring out how to divide up the house with a wall of cardboard boxes to separate one half of the room. For another, barbed wire between the living room and the kitchen island in the middle of the—before the dining room.

And then upstairs in the bedroom, we had a division of property and with a paper cutter, we cut our wedding document in half, the wedding invitation, some correspondence that was sort of symbolic. And then with, I guess, a utility knife, cut the mattress in half with scissors and ripped the sheets in half. And then I had this circular saw and cut the wooden platform of the bed in half. And there was a wicker loveseat that I chopped in half. So this was the division of property and we tore our wedding garments in half.

LINDA YABLONSKY: Was this documented?

GEOFFREY HENDRICKS: There's some documentation of it.

GEOFFREY HENDRICKS: Yeah, Peter Moore took photographs. And there are maybe some others. I don't know that there's video, but then I made a Flux–Divorce Box so that I have this as an object. And there are copies of it in, I guess, in MoMA and the Getty and the Sohm [Archive] collection in Stuttgart, and sort of, you know, there maybe half a dozen key Fluxus collection series.

LINDA YABLONSKY: It sounds like it sets quite a precedent for Gordon Matta-Clark.

From a casual interview I did with Hendricks in the early nineties:

DD: How many of these were produced?


From an interview with Lars Movin:

GH: Early in 1978 while George Maciunas was battling terminal cancer, he said to me "Geoff, we had your "Flux Divorce", we should also have a "Flux Wedding". Ht wanted to have a Flux Wedding with Billie Hutching, who he was with, and he wanted me to be 'minister'.