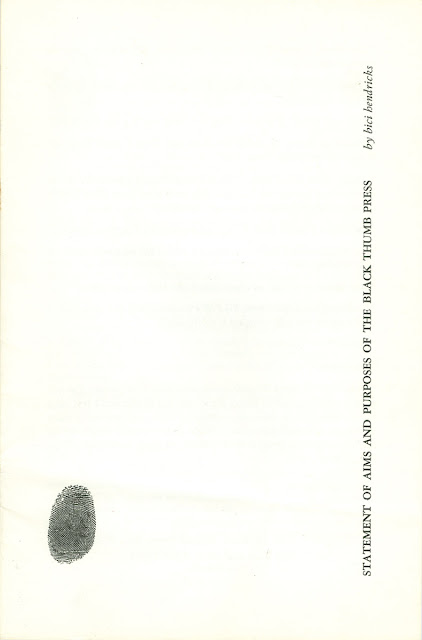 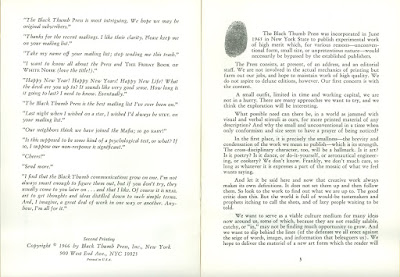 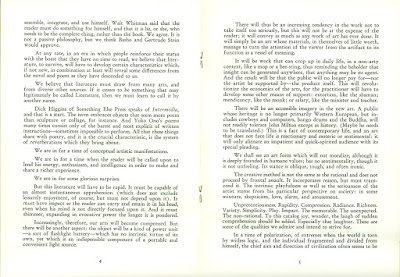 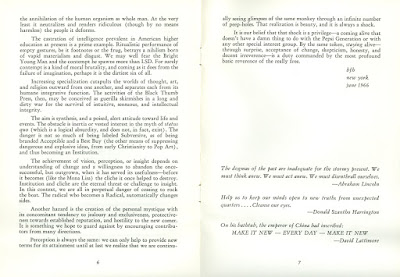 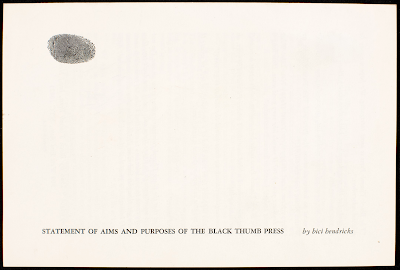 A manifesto by Bici Forbes (now Nye Ffarrabas) for The Black Thumb Press, the publishing venture she co-founded with her then-husband Geoffrey Hendricks.


"[...] my feeling was that, well, Happenings are Kaprow, Events are Brecht, and Watts was there with Maciunas and the beginnings of Fluxus. It was exciting, but I wanted to find my own voice within this, rather than just being a part of what this circle of artists around me were generating. I was also involved in a heterosexual marriage, and in ’64 we had the birth of our daughter which had some impact in ways that deflected certain creative juices and drives. But I was also feeling connected with it all. Really, from ’63 when the Fluxus people came back from Europe, Bici/Nye and I were involved in doing things of this nature. I guess it was around this time that she asked Bob Watts, “how do you become a member of Fluxus?” and Bob sorta shrugged his shoulders and said “well you either are or you aren’t. It’s nothing you can join.” So we started the Black Thumb Press, and sent out cards, and kept an ongoing journal we called The Friday Book of White Noise where we would write down scores, thoughts, ideas. Then, when Watts and Brecht brought together their Monday Night Letter at the Café au Go-Go, we did a reading of “The Friday Book of White Noise” and Bici/Nye made a script/scroll as a Möbius strip — it was a continuous thing. These were Fluxus-like scores. And then, by ’65, George Maciunas began including us on his mailing list of names and we were taking part in Fluxus Banquets and a paper concert at the Time Life Building. So, sort of by osmosis, in the 60’s we began to be part of Fluxus, but still we were also in a little bit of an outsider role — something that my life has always had."