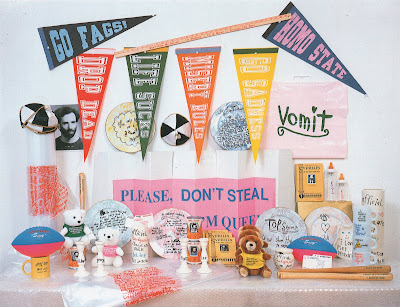 From Roula Partheniou's interview with Cary Leibowitz in One For Me and One To Share (launching, ahem, on Saturday at YYZ):

RP: Notions of retail seem important to your work. You once mentioned wanting to open a store that only sold plaid, for example.

CL: Oh yeah, I forgot about that idea. I’m always fantasizing about those kind of concepts – a store that might only sell trash cans, for example. I feel like I’ve missed the boat a bit because there are now retail stores not unlike that. Obviously not as specific, but stores that certainly wouldn’t have existed ten or fifteen years ago.

If someone said to me that I could either have backing for a retail store idea for the next five years or a traveling retrospective at all the biggest museums, I think I’d take the retail store.
Labels: Cary Leibowitz, OFMAOTS