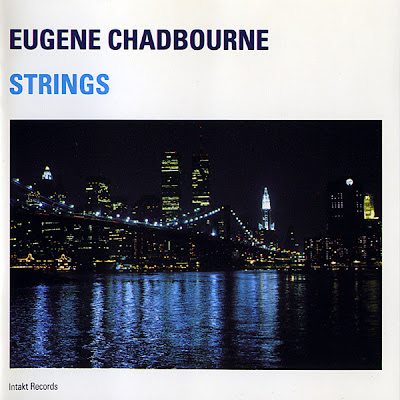 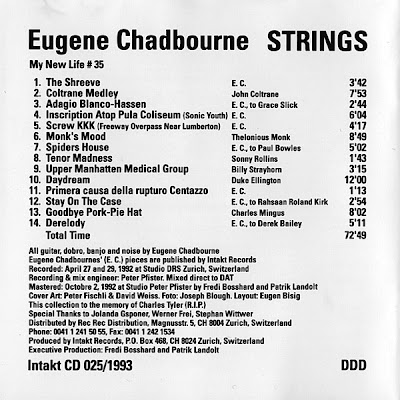 Eugene Chadbourne is an American improvisor, guitarist, banjoist, and inventor of the electric rake. He has collaborated with both experimental improvisors (John Zorn, Fred Frith, Derek Bailey, etc.) and more conventional bands and songwriters, such as Camper Van Beethoven, They Might Be Giants, Violent Femmes, and Toronto's Bob Wiseman. His Canadian ties extend back to the 70's, when he produced and hosted a radio show on Radio Radio 104.5 Cable FM in Calgary, Alberta,

His 1993 release Strings is an instrumental record, featuring eight titles, including songs by Sonny Rolling, Billy Strayhorn and Duke Ellington. The disc was released on the Swedish indie label Rec Rec (who had previously put out disks by Frith, Negativland, Skeleton Crew, Red Crayola with Art & Language, and Christian Marclay's Footsteps). The "cover art" is atttributed to Fischli and Weiss, however, both the cover photo and the layout are credited to others (see back cover) so it's unclear exactly what their contribution was.
Labels: ACBA, Fischli/Weiss