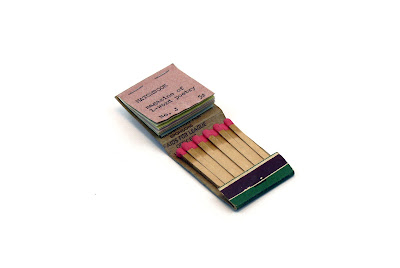 
From 1972 to 1975, American writer, artist and educator Dave Morice perpetrated a literary hoax by inventing the persona of 'Joyce Holland'. Holland was billed as a minimalist/concrete poet and performance artist. Morice submitted her poetry to literary magazines, twenty-nine of which published examples of 'her' work.

After receiving a grant of fifty dollars from the National Endowment for the Arts, 'Holland' began the publication of the "littlest little mag to ever light up the poetry world." Mimeographed at a cost of a penny an issue and housed in matchbooks donated by local businesses, the publications sold for five cents an issue. Holland served as the editor and other writers contributed single word poems.

It is unclear whether these authors were actually solicited and responded to the novel gesture, or if Morice simply invented their single word poems. Allen Ginsberg is purported to have contributed the word "apocatastasis", Anne Waldman "INCA" and Aram Saroyan "puppy".

Thirteen issues in total were published, from A to M. The sixth issue was an "all-women's issue", the seventh was a blank "do-it-yourself" issue, and and the tenth (above) was the "contest winner issue".
Warhol associate Gerard Malanga contributed the portmanteau of "month" and "mother" ("Monther") for honourable mention. First prize was awarded to Fletcher Copp for "CEREALISM".

Morice's girlfriend, actress P.J. Casteel, played the physical role of 'Joyce Holland' at public readings of the author's work. She and Morice were invited to appear on Tom Synder's Tomorrow Show in 1974. During the episode, Morice scrawled a poem onto her dress, and 'Holland' led the audience in a "Poetry Cheer". I am, however, unable to verify the veracity of this story.