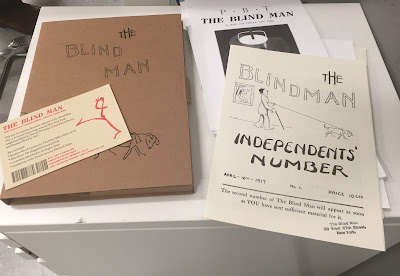 Ugly Duckling Presse rings in the 100-year anniversary of The Blind Man (the first DADA magazine published in the United States) with a new facsimile of the magazine, which was published in 1917 by Marcel Duchamp, Henri-Pierre Roché, and Beatrice Wood. While the issues are slim, they pack a sly punch with their gauntlet throwing and trademark DADA wit.

Issue one was published on the opening date of the Society of Independent Artist’s “First Annual Exhibition” and the magazine takes up the “no jury, no prizes” spirit of the exhibition with an editorial policy modelled on the referendum. That said the first issue contained just a few contributors, with writings by Roché and Wood and also Mina Loy.

As we all know, this exhibition is where R. Mutt made his debut and the second issue takes up R. Mutt’s (non)position in the exhibition, defending his work with an editorial and the first publication of Alfred Stiegelitz’s famed photo of “The Fountain” with the caption “The Exhibit Refused by the Independents.” The issues also contains a good deal more, with contributions of prose, poetry and essays by Walter Arensberg, Gabrielle Buffet-Picabia, Robert Carlton Brown, Frank Crowninshield, Charles Demuth, Marcel Duchamp, Mina Loy, Louise Norton, Francis Picabia, Joseph Stella, Frances Simpson Stevens, and Clara Tice.

The magazine folded after the second issue, a result supposedly determined by a chess match between Roché and Picabia, who had a magazine of his own named 391. As the story goes whoever won the match, got to keep their magazine and, well, Roché lost in 34 moves. The game is detailed in the pages of Duchamp’s one-off RongWrong, which is also included in the UDP box. Other inclusions include Man Ray’s Ridgefield Gazook, Wood’s poster for the Blind Man’s Ball, an introduction by the edition editor Sophie Seita and English translations of the French texts by Elizabeth Zuba.


James Hoff is an artist living in New York City. He is the co-founder of Primary Information, a non-profit organization devoted to publishing artists's books.