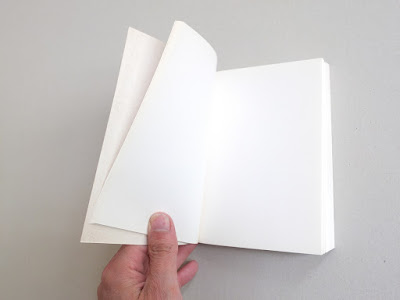 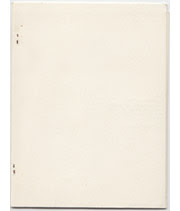 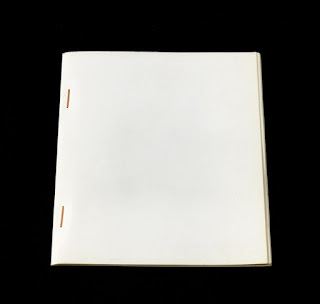 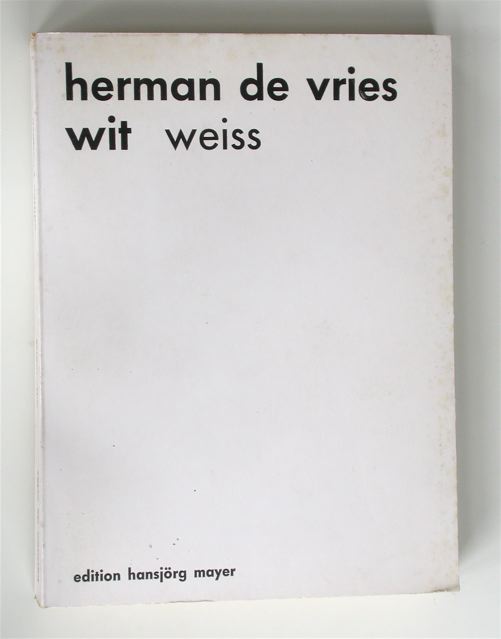 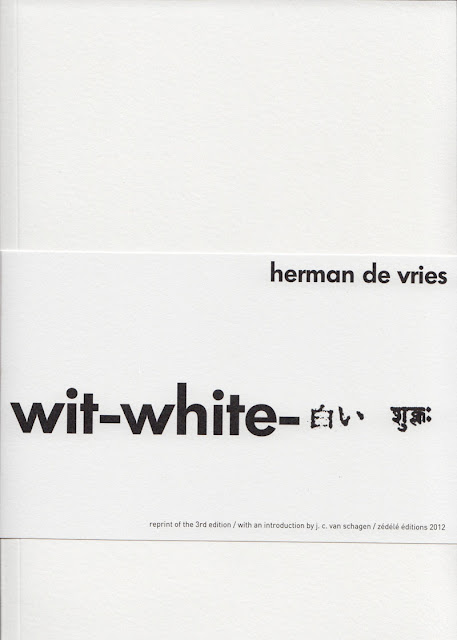 
In 1951, Robert Rauschenberg produced the three-panel work, White Painting, which consisted of uninflected surfaces painted in matte white paint, applied by roller. Somewhat scandalous at the time, White Painting strongly resonated with Rauschenberg’s friend and frequent collaborator, John Cage. Cage incorporated the work into his Theater Piece #1 (now considered the first ‘happening’), produced later that year at Black Mountain College, hanging the painting from the ceiling during the performance.

Cage viewed Rauschenberg’s blank surfaces as "landing strips" or receptors for light and shadow, and was inspired to produce a musical composition with similar aims. Composed and performed the following year, 4'33" consisted of pianist David Tudor seated quietly at a piano, not playing for four minutes and thirty-three seconds. The score simply reads ‘tacet’. The only sounds heard are ambient and incidental, such as the cough or fidget of audience member. 4'33" remains the celebrated composer’s best known work.

Empty gallery exhibitions include Yves Klein’s The Void, Robert Barry’s Closed Gallery, Robert Irwin's Experimental Situation and Ray Johnson’s Nothings, where the artist cut the power to the AG Gallery and placed wooden dowels on the darkened staircase leading to it, rendering it impossible (or at least very hazardous) to enter the space. For her 2001 exhibition Money at the Kunsthalle Bern, Maria Eichhorn presented an empty space in order to allocate her show's budget to long-overdue repairs to the museum building itself.

There are a surprising number of silent pop songs, released by artists as varied as Wilco, Coil, Crass, Sly and the Family Stone, Sigur Rós, Afrika Bambaataa, Ciccone Youth, and John Denver. John Lennon and Yoko Ono’s Two Minutes of Silence from their 1969 Life with the Lions LP pays homage to Cage but also serves as a memorial for the couple’s miscarriage. It follows a five-minute hospital recording of the their unborn child’s final heartbeats. The song was ‘covered’ by Soundgarden in 1988, but at half the length. The truncation is designed to disannul Ono’s contribution, a mean-spirited gesture exacerbated by the context of the original.

Sleepify, a 2014 album by the funk band Vulfpeck, exploited a loophole in the streaming service Spotify's royalty calculation model. The band encouraged their fans to fall asleep listening to the ten-track silent album, which resulted in royalties of $19,655, before being removed from the service. The band used the funds to finance an admission-free concert tour of the US.

In 1980 punk rock indie label Stiff Records released The Wit and Wisdom of Ronald Reagan, a satirical LP divided into two sides: ”The Wit" and "The Wisdom", both of which are divided into multiple tracks, but are completely silent. A year prior, a character in the John Cleese sitcom Fawlty Towers refers to “The Wit of Margaret Thatcher” (alongside “Great English Lovers”) as “one of the world’s shortest books”.

Footballer Len Shackleton’s 1956 autobiography contained a chapter titled "The Average Director's Knowledge of Football". It consisted of a single blank page. The Official Government Nuclear Survivors' Manual: Everything That Is Known About Effective Procedures In Case Of Nuclear Attack is an all blank book.

There are myriad examples of the blank page and volume employed by satirists, artists, authors, and poets. Lewis Carroll’s nonsense poem The Hunting of the Snark from 1879 contains an illustration of a blank map of the ocean. Laurence Sterne’s The Life and Opinions of Tristram Shandy, Gentleman (1759) - the greatest shaggy dog story ever told - features two all-black pages at the end of Chapter 12, Book One.

Piero Manzoni’s posthumously published autobiography, Life and Works (1969), is a blank book of translucent paper. AA Bronson appropriated the approach for his own Life and Works in 2009, adding a gold tint to the acetate, causing it to become reflective. Doro Boehme and Eric Baskauskas scanned the blank pages from Ed Ruscha’s influential artist books and produced Various Blank Pages in 2009.

In 1969, Sufi author and teacher Idries Shah, published The Book of the Book, a nine-page story housed in a 300+ page book with a gold embossed cover. The story Shah recounts is a 700 year old legend of a sage presenting a large book to a group of scholars, who believe they are victim of a hoax when they learn that the book is mostly blank. Similarly, customers in 1969 complained to booksellers and the publisher, demanding refunds. The British Museum (which archives a copy of every title published in the country) returned the volume, reportedly saying it “not a book at all”. The title is now in it’s seventh printing and can be viewed digitally here.

Maurizio Nannucci’s Universum (1969) and David Stairs’ Boundless (1983) are both (presumably) blank books that the reader is denied access to: the former is bound on both vertical edges creating two spines and the latter a circular book with 360-degree spiral binding.

The nineteenth century French poet Stéphane Mallarmé argued that “the most perfect poem is a blank page”. Mexican artist, writer and publisher Ulises Carrión wrote in the The New Art of Making Books (1975) that “the most beautiful and perfect book in the world is a book with only blank pages”.

Choosing a favourite blank book might itself seem like an exercise in paradox or parody, but the commitment to the concept by Dutch artist herman de vries, helps elevates wit weiss to the status of classic. His dedication dates back almost sixty years. de vries began painting monochromes in 1956, and by ’59 was producing all white paintings. His first white book (which was also his first publication) appeared a year later, in 1960. Staple-bound, the modest 20-page booklet consists of a few sheets of blank white paper with no content and nothing on the cover. The end colophon page, printed in pale ink, reads:

Retitled wit in 1962, the book was now expanded to two-hundred blank pages and the inclusion of an introduction by the poet J. C. van Schagen, also blank. This was followed five years later with wite weiss, now fifty blank pages longer, in an edition of five hundred copies. This pocket-sized volume was published by Hansjörg Mayer in Stuttgart, an influential publisher of artists’ books best known for his prolific collaborations with Dieter Roth.

The Artists Press in Berne published the “third revised edition” in 1980, in a larger format and with further additional blank pages. The original title wit was translated into English, Japanese and sanskrit with a word that means “white” in the sense of bright, pure and immaculate. de vries considers this version the most polished:  "The title and the names of the author, editor and preface author have been printed in a white band that surrounds the book, which is completely white this time."

On the inside of the band it states "in this book, where all contradictions have been removed and the contents of which are suitable for everyone, where we have moved beyond all problems and where nothing is cut from reality or is unilateral, we can say that this is a positive contribution to the summary of the whole." Five thousand copies were advertised but only a hundred produced.

It is this 1980 "polished" version that forms the basis for the recent Zédélé Editions reprint. The French publisher's Reprint Collection (2012-2014) aims to produce facsimile reproductions of classic artists' books in order to make them available to newer generations of readers. The series also includes influential titles by Dan Dibbets, Lawrence Weiner, Emmett Williams, Richard Long and Peter Downsbrough.

As one might imagine, copies of de vries' titles are difficult to come by. The Hansjörg Mayer version can occasionally be found on the secondary market for around $600 US. The others are essentially unobtainable. Zédélé Editions rescues the title from obscurity, reprinting the 1980 version faithfully, with the only addition being the french translation of the band statement.

To maintain the integrity of the all-white book, a loose single-page explanation is inserted inside the front cover. It includes a statement de vries made about the work in 2012, elucidating his intention (and insisting on the importance of the final comma):


white is white
0 = 0
no name
no idea
not even emptiness,


This clarification is key, like the difference between an untitled work and a work whose name is Untitled. Unlike Rauschenberg's canvases, the pages of the book are not a surface for shadows to dance. de vries does not want the reader grasping for content. The work serves as a denial of all possibility of narrative or external reference.

“An empty sheet means more than a written one,” the artist stated in 1975, “only meaning is absent.”


The Zédélé Editions reprint is available from the publisher, here, for 25 Euros. 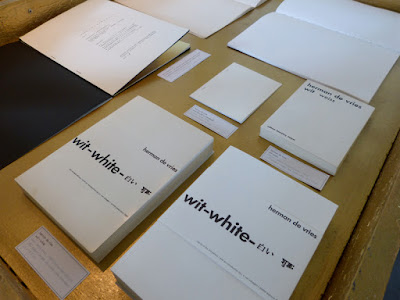