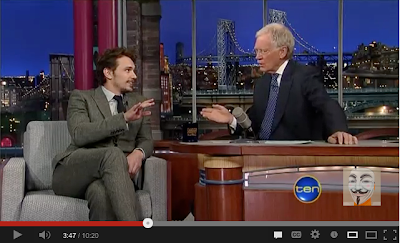 Last year I posted the transcript to one of Harmony Korine's visits to the David Letterman show (the first, and only that I'm aware of, time someone appeared on the program to promote an artists' book). It can be read here.

The filmmaker appeared on the show three times, all extremely entertaining, and then never again. There was a rumour that he was banned for life and that it involved Meryl Streep.

The other day James Franco (who stars in Korine's new 'crossover' film Spring Breakers) appeared on the Late Show and prodded the host to reveal the actual story. It turns out it involves Korine going through Streep's purse and being caught by Letterman.

The full interview can be watched here.