Heresies #1: a feminist publication on art and politics 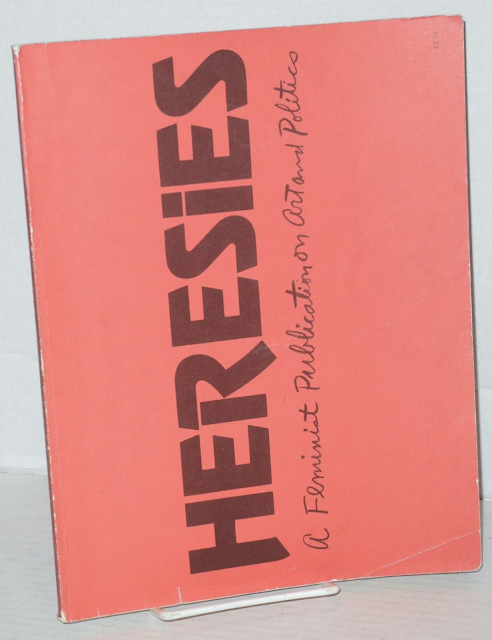 Heresies Collective
Heresies #1: a feminist publication on art and politics

The premier issue of the feminist journal focusing on art and politics that debuted in January 1977, featured Tijuana Raid by Martha Rosler, Feminist Abstract Art by Harmony Hammond, Female Experience in Art by Ruth E Skin, A Pink Strip by Amy Sillman and the Pink Glass Swan by Lucy Lippard, who was one of the founding members of the collective.

The first issue opens with a mission statement ("...we believe that what is commonly called art can have a political impact, and that in the making of art and all cultural artifacts our identities as women play a distinct role"), and closes with a selected bibliography on Feminism, Art and Politics.

Artists whose works or writings were featured in the magazine include Laurie Anderson, Louise Bourgeois, Ana Mendieta, Howardena Pindell, Adrian Piper, Pat Stier, and many others.

Black and white scans of the journal's entire run, from '77 to 1993, are available thanks to the efforts of one of the collective's founders, Joan Braderman, who also produced a 2009 documentary about the journal’s early days.

The archive can be found at http://heresiesfilmproject.org, where a trailer for the documentary can be viewed, and the film purchased on DVD. The site also contains biographies for each of the founding members, and press clippings.