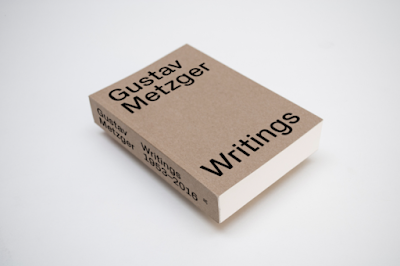 A soon-to-be-released title which collects more than 350 texts written by Metzger between 1953 and his death in 2017. Edited by Gustav’s long-time friend and curator Mathieu Copeland, this anthology includes seminal writings such as his manifestos of auto-destructive and auto-creative art (1961), ‘On Random Activity in Material/Transforming Works of Art’ (1964), ‘The Possibility of Auto-Destructive Architecture’ (1966), an interview with Buckminster Fuller from 1970, as well as art criticism, political satire, and lecture transcriptions.


An exhibition titled Gustav Metzger: Misfits-Memoriam opens Thursday night from 6 to 9pm at
mfc-michèle didier, in Brussels. Carried out in partnership with the Gustav Metzger Foundation and under the curatorial supervision of Guillaume Leingre, the exhibition will be accompanied by round table discussions about the artist. The first takes place on May 24th, at 7pm with Leingre and Patrice Joly (art critic, editor-in-chief of 02 Magazine).