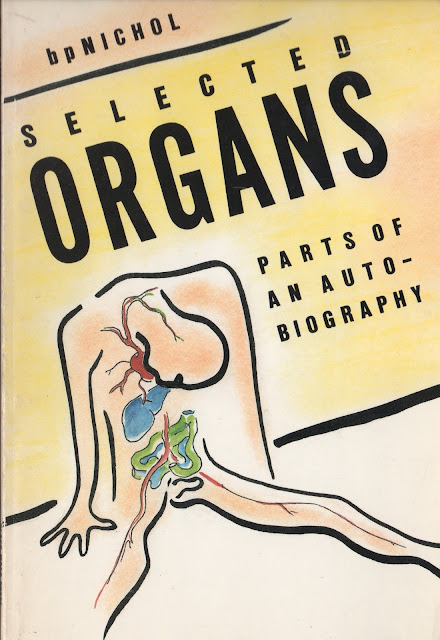 Eight years into a larger planned volume called Organ Music, Nichol released this slim volume of excerpts as an "interim autobiography". The book features ten organs, beginning with The Vagina, (which he first wrote in March of 1980) and ending with The Sum of the Parts. Also included are The Mouth, The Tonsils, The Chest (see excerpt below), The Lungs, The Fingers, The Hips, The Anus and the Toes. Nichol imagined the larger volume containing a total of twenty organs, though Black Moss reissued this book (with the addition of never before published poem called The Lily) last September, until the title Organ Music. It is available from Amazon for $12, here.

You were obsessed with it. Everyone was obsessed with it. On the edge of thirteen when Carol Wisdom’s chest started to develop you couldn’t take your eyes off it. Until you were twelve everyone who was your age had a chest. But then you turned thirteen & you had a chest & she had breasts on her chest & your chest was puny & he really had a chest & she was chesty & all the bad puns began about being ‘chest friends’ & it was ‘chest too much’ or ‘two much’ or ‘two for tea anytime baby (which of course you always said to a guy coz you were too embarrassed to say it to a girl) & suddenly you had discovered chests as if they had never been there before & they were everywhere, everywhere, & you were obsessed with them.

From the age of five to the age of sixteen you kept getting chest colds. Once a year for three weeks you’d be sick in bed, you voice getting deeper (which you liked), you breathing shallowed (which you hated), your nostrils redder, your face whiter, saying mutter for mother muttering for her. She’d bring you gingerale (to soothe your throat), vicks vaporub (to clear your head), & you”d say ‘I’m gedding bedder’ oer & over again like a charm clutched to your hopeless chest, ‘I’m gedding bedder’ you’d say, sinking furthe into the sheets, ‘I’m gedding bedder’, til the bed & you were one pale continuous tone, white on white in white, ‘I’m gedding bedder—bedder.’

It was where longing resided. It was what you played your cards close to. It was one of the few body parts rhymed with the furniture & it held hope or tea or linen. It was a clear noun, substantial, the only named part that didn’t seem small, didn’t seem somehow smaller thru naming. It had no funny names or corny names or dirty names & it was the largest part of all. You stuck it out. You puffed it up. It was chest. What it was was chest.

You didn’t think o the chest as sensitive until you danced with her. You were thirteen & the dance floor was crowded & tho the moving bodies of your friends pressed you together you would only allow your chests to touch & there was heat & pressure & movement between you & your chest was ten times more sensitive than your hands, felt more than your eyes could see, & your trapped heart pounded as if you would die, explode, right there before her eyes, disintegrate from the ache & longing. You were in love, your chests were in love, as the music & the crowd carried you, pressing you closer & closer together, over that moving dance floor that dark warm August night.

When you went into therapy all the language changed. Now the chest was something you got things off or bared, some place you shouldn’t keep things inside of, as if it were a vessel & feelings held there grew stagnant, festered, expanded under pressure until released to air. In the shakey diagramming of the unconscious it was where deep lay—deep feelings, deep disturbance—or you thot it was because weren’t you always being told you shouldn’t be too heady, shouldn’t talk off the top of your head, that it was bad to be cut off at the neck, dead from the neck down, & from the neck down is where the chest is. But not too far down because after all you weren’t supposed to dump shit on anyone either, or talk a load of crap, piss on the them, be a shit, & what was left then but the chest unless, of course, you had a gut feeling. But gut was too ambiguous, too subject to the charge you were just spewing vomit. No. It was the chest. It had to be the chest; that was where the heart was & the heart was good. You were good-hearted, had a lot of heart &, when you got right down to things to had a heart to heart, really opened up, bared your chest & spoke from your heart all your real feelings, your deep feelings, got everything off your chest, just like you were supposed to.