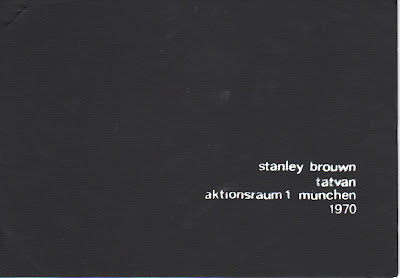 Sometimes refered to as X-Tatwan (as it appears on the inner title page) this is Brouwn's first conceptual artist's book. Tatvan is a town in Turkey where the railway abruptly ends.* Brouwn traveled there to talk photographs of an imaginary railway extension. These, however, are not featured in the book. The book consists of single page 'conceived' distances between various locations, which are listed only as the variable 'x'. For example:

The lengthy distances suggest that Brouwn intended his imaginary railway extension to be interplanetary.

"Tatvan is connected by Train ferry across 96 km of Lake Van to Van which avoids 250 km of railway construction in mountainous terrain. This is a low capacity route which will be replaced by a proper railway when traffic increases."
Labels: artists' books, Stanley Brouwn