Fiona Banner | Your Plinth is My Lap 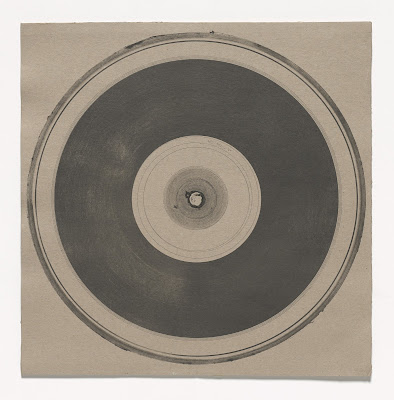 
"For Your Plinth is My Lap, Banner recorded herself reading the account of the film onto a lacquer. At a pumped-up 14" in diameter, this lacquer is somewhat larger than the standard 12" ones used as templates in the production of LPs. It is played on a specially adapted turntable placed on top of a plinth with mirrored sides. You have to place the needle on the record yourself in order to hear it. Unlike the vinyl end product, the lacquer is fragile and is not designed for repeated playing. It will inevitably degrade as the work is listened to over and over again. As with her 23 hour recording of The Nam, Banner reads in an unrehearsed, unspectacular fashion. Banner says that there is no attempt to dramatise the script or to invest it with any particular emotional qualities. She does, nonetheless, have a distinctive style of delivery in which the absence of pacing, of pauses and silences, and of vocal dynamics results in an intense, unremitting flow of words that builds tension in the listener. The straightforward temporal succession of scenes in the film appears at first to be matched by Banner's detached descriptive account of what can be seen on the screen. If she is talking fast and leaving no gaps, then that's only because there's a lot to say before the next edit and the film won't hang around to let her catch up with the plot. Pretty soon, though, the language stream begins to assume a shape of its own. No longer merely a string of flat descriptions, dependent for their legitimacy upon the structure of the image up on the screen, the narrative develops a rhythm, a pulse that originates somewhere between the words themselves and Banner's body as she reads them. And as this rhythm asserts itself the listener finds it increasingly easy to recognise that the descriptive language is far from being anodyne. Certain features of the lighting, particular actors, specific aspects of body, clothing or background detail are repeatedly singled out as the focus of attention. Banner's response to the film starts to take over from her account of it."